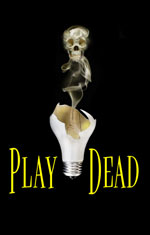 Todd Robbins’ new off-Broadway show, “Play Dead,” is described as a scary, magic-filled exploration of death, darkness, and deception. If I lived in New York, I’d go see it, but since I don’t, I sent my mother, who does.

She and a friend were in the audience a couple of weeks ago and had a great time, from the moment the lights went down (and Robbins then turned off the red “exit” signs to make the place truly pitch black) to the moment they left. She described it as one of the most fun nights she’d had in the theater in a long time — and that’s saying something considering how many shows she’s attended.

I’ve been a fan of Robbins for quite awhile, and interviewed him last year about the documentary “American Carny

,” which features him and other performers who have kept alive the sideshow tradition (here’s that conversation).

“Play Dead” was directed by Teller, who commuted back and forth to New York from the Rio in Las Vegas, where he still works with Penn. He does a much better job explaining Robbins’ show than I ever could. Then again, he’s seen it, and I haven’t, dammit.

Here’s Todd talking about the show, followed by some disclaimers…