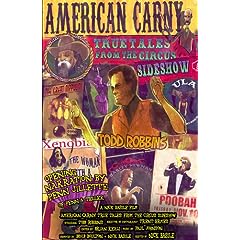 Here’s another example of an interview with someone who fascinates me, because he’s had experiences I’ve never had and is wildly entertaining in discussing them.

Todd Robbins is a freak — a sideshow artist and magician who eats light bulbs and pounds nails into his nose for a living. Today on KTRS, we talked about his life in the sideshow, the performers he’s worked with and been inspired by, and the documentary he’s featured in, “American Carny” (which debuts on The Documentary Channel on October 19th and is available on DVD here). We also discussed his “Modern Con Man” book and DVDs.