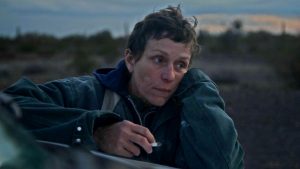 When the sheet rock factory in Empire, Nevada, closed in 2011, it left Fern unemployed and adrift. Having lost her husband a few months earlier, and with the locals abandoning the now-dead town, she was left with nothing. So, Fern decided to hit the road in her van, which became her new home. She slept in it, cooked in it, and spent many lonely hours in it. As she drove through the southwest, she’d stop for a few days here and there, taking whatever jobs were available to earn a few dollars. She did seasonal work for Amazon, janitorial work for a national park, and kitchen work in restaurants.

Linda May, a friend from the Amazon warehouse, invites Fern to join her in Arizona for a meetup of similar van dwellers, organized by Bob Wells, who offers support and seminars in how to live the nomad lifestyle. Through Wells and some of his followers — mostly over sixty, with not much besides social security checks and a slew of sad stories — Fern learns how to survive.

Frances McDormand (who also produced) embodies Fern as a woman whose life has been ripped out from under her, yet is determined to keep going. McDormand brings a quiet intensity and natural resilience to the role, often telling us more about Fern in her silence than in any piece of dialogue.

Chloé Zhao — who directed, edited, produced, and adapted “Nomadland” from a book by Jessica Bruder — captures vistas both strikingly beautiful and woefully depressing, and lets McDormand take her time, essential in a movie about a woman in no rush to get on to the next thing. The always-reliable David Straithairn appears, too, as a man also living out of his van who befriends Fern.

Zhao also includes several real-life van dwellers among those Fern encounters, including Bob, Linda, and a woman named Swankie. Their life stories, some relatable and some tragic, add an extra dimension of verisimilitude to the “Nomadland” story. They also help weave together the various vignettes that make up Fern’s adventure, even though it doesn’t have a firm destination.

“Nomadland” has a bit of a parallel to the movie directed by and starring Robin Wright, “Land,” which was released a couple of weeks ago (my review is here). Both are about women whose lives are upended by trauma, but they deal with it in different ways. The biggest difference is that while Edee (Wright’s character) chooses to live alone in the wilderness, she has to be saved by a man. Fern, on the other hand, happily engages with and learns from people who cross her path, but is able to determine her own way.

“Nomadland” is a fascinating character study that doesn’t depend on action sequences or fancy cinematography, relying instead on subtle natural light, breathtaking rock formations, and minimal makeup. It’s a window to a choice many older Americans are forced to make because of a financial downturn or other personal circumstances. The movie doesn’t sugarcoat the rawness of the lifestyle, nor does it offer a typical Hollywood joyful ending, but if offers insight into how one woman has to readjust her expectations and face a new reality.