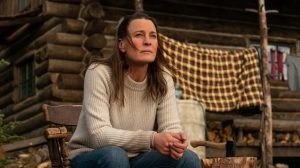 In “Land,” Robin Wright is Edee, a woman who has gone through some event so traumatic that she wants to get away from civilization entirely. She buys a log cabin atop a mountain in Wyoming and takes a U-Haul trailer full of supplies. Before she moves in, she asks the guy who sold it to her to have someone from town pick up her vehicle and the trailer. He warns her that it’s not smart to be alone up there with no transportation, but she shoos him away, intent on making a new life on her own in the wilderness.

The problem is that, other than opening cans of chili, sweeping out the room, and fixing a hole in the roof, Edee doesn’t actually know how to survive. She’s never killed an animal and it’s not like there’s a diner nearby where she can grab a meal. At first she thrives on the lonely quiet, but pretty soon, she’s having visions of her husband and son, whose deaths we are to assume led her to this place.

By the time winter rolls around, it’s clear that nature is going to get the best of Edee — particularly since the only bathroom is an outhouse. Fortunately, Miguel, a member of a local Native American tribe, notices there’s no smoke coming from Edee’s chimney and barges in to discover her on the floor, starving and nearly frozen to death. When she refuses to be moved to a hospital, Miguel sticks around to nurse her back to health. He agrees not to violate her privacy, but teaches her how to fish, trap game, and cut enough firewood to keep the cabin warm. They develop a nice, platonic relationship, but as with everything else in “Land,” it goes nowhere.

Like Reese Witherspoon’s “Wild,” Wright (who also directed) set out to make a movie about a woman battling the elements to overcome a personal tragedy. As in that story, “Land” shows off some beautiful vistas (shot by cinematographer Bobby Bukowski), but not much else. Sure, you’ll root for Edee to find a way to overcome the mental anguish she suffers by beginning a new life in the great outdoors. However, there’s virtually no drama to keep you interested otherwise.

“Land” is so bland it wouldn’t even make it as a movie on the Hallmark channel. Its pacing is far too slow, and its conclusion seems almost tacked on. Wright is a fine actress and does an admirable job as a director, but (like Witherspoon) needed better material to work from.

I give “Land” a 3 out of 10. It will open in some theaters today, with no date set for a premiere on any streaming services.