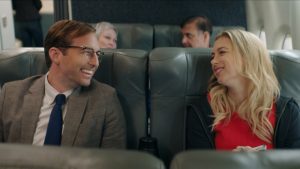 I’ve been a fan of Iliza Shlesinger’s standup comedy for several years, and was happy to see her break into movies with a supporting role in “Spenser Confidential” (which I reviewed here last year). Now she’s moving up to leading lady status in “Good On Paper,” which she wrote and and produced for Netflix.

The movie is based on an actual experience Shlesinger had several years ago with a guy who lied to her about almost everything — his job, his home, graduating from Yale, and more. The same thing happens to her character, Andrea (also a comic), when she meets Dennis (Ryan Hansen) on a flight home. She has no physical attraction to him, but they strike up a friendship and start hanging out together — a lot. The more they do, the more he lies, in an effort to get her to fall for him. Andrea’s best friend, Margo (Margaret Cho), suspects something’s hinky about Dennis, but Andrea doesn’t see it for a long time, doubting herself instead of him.

Shlesinger dubs “Good On Paper” a rom-con, which fits perfectly. The fun is in watching her blinders-on approach to the relationship even though we can smell the smarm and see how desperate and lame Dennis’ sophistry is. Then, when the light bulb finally goes on, there’s more fun as she drags the truth out of him and puts an end to whatever the hell this whole thing was.

As Shlesinger did in real life, Andrea uses the goings-on as the basis for some of her standup routines, in scenes shot at the Comedy Store (where Shlesinger regularly works out). There’s also a running subplot about Andrea’s jealousy towards Serrena (Rebecca Rittenhouse), an annoyingly friendly actress who started out at the same time but has had more success, including a billboard right across the street from the Comedy Store.

It all comes together in a very satisfying manner, with Shlesinger proving her chops as both a comedic actor and writer. Her facial gestures — in reaction to her co-stars — are even better in this movie than in her many standup specials. Director Kimmy Gatewood gives the proceedings just the right pace, doesn’t let the editing get in the way of the comedy, and brings out nice performances all around.

Oh yeah, it’s funny, too, easily racking up the most laughs of any movie so far this year, which means it’s likely to make my Best Of 2021 list.