While you’re cooped up, looking for something new on TV to help pass the days of isolation, here are mini-reviews of four things I’ve watched lately (in descending order of quality)… 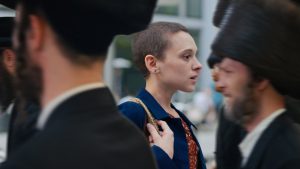 “Unorthodox” is a based-on-a-true-story drama about Esty, a 19-year-old woman who flees the Hasidic community she was brought up in. Leaving behind her husband from an arranged marriage in the Williamsburg section of Brooklyn, she escapes to Berlin to try to begin a new life. Shira Haas is phenomenal as Esty, whose sad story is told in both present day scenes and flashbacks from her years in the oppressive religious cult that is ultra-orthodox Judaism. Major kudos to director Maria Schrader, production designer Silke Fischer, and costume designer Justine Seymour for getting the look right in every scene, which enhances the outstanding performances and the believability of the characters. “Unorthodox” is the first Netflix series where most of the dialogue is in Yiddish, with English subtitles, but the story is so compelling you won’t have any trouble following along. I give it a 9.5/10. (4 episodes, all under an hour) 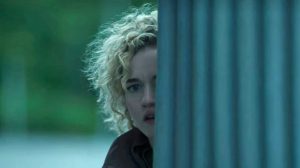 It’s been a year and a half since we last saw the adventures of the Byrde family in “Ozark,” but now season three has arrived on Netflix — just when we need it — and it’s as great as the first two. The Byrdes must still deal the brutal leader of the Mexican drug cartel for whom they launder money and the Kansas City mob they were forced to partner with in their casino project, but it’s the appearance of Wendy’s bi-polar brother, Ben (Tom Pelphrey), that injects a new level of havoc into their lives. While Jason Bateman directed several episodes and continues to star as Marty Byrde, the best work on the show is by its three female leads — Laura Linney (Wendy Byrde), Julia Garner (Ruth Langmore), and Janet McTeer (Helen Pierce) — who dominate every scene they’re in. I give it a 9/10. (10 episodes in each season, which should be watched in order)

“The Banker” is a movie about Bernard Garrett (Anthony Mackie), a black man with dreams of becoming a real estate tycoon — a tough task in 1950s rural Texas. Excluded from the system by racism, he moves to Los Angeles, where he partners with Joe Morris (Samuel L. Jackson), a wealthy black man who owns a nightclub and several rental properties. Together, they build quite an empire and, along the way, teach Bernard’s white friend Matt (Nicholas Hoult) the basics of the business. When Bernard becomes determined to move back to Texas and buy the bank that turned him down so many times, he and Joe ask Matt to front for them. But the good-old-white-boy system does not like being toyed with, so there are consequences. Unfortunately, despite good performances, too much of “The Banker” is predictable, so I give it a 5/10. (two hours, currently streaming on Apple TV+) 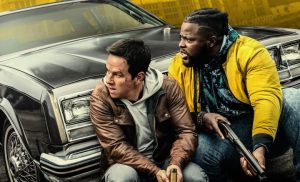 In “Spenser Confidential,” star Mark Wahlberg and director Peter Berg are back for the fifth time for an action/adventure movie that requires no heavy lifting on the part of the viewer. Wahlberg is Spenser, a Robert B. Parker character played on TV many years ago by Robert Urich. He’s an ex-cop who’s just been released from prison and wants two things — to take it easy at the home of his old mentor Henry (Alan Arkin) and avoid his ex-girlfriend Cissy (Iliza Shlesinger). Naturally, neither of those happens. Along with Hawk (Winston Duke), who also lives at Henry’s house, Spenser is drawn into a case involving two dead cops. And, like all Wahlberg movies, the climactic fight doesn’t involve guns or knives, but punches and kicks in a fistfight. If you disengage your brain, this passes for entertainment, but only barely. The only bright spot for me was seeing Shlesinger, a standup comedian I really enjoy, bringing the cliched ex-girlfriend role up a notch and getting to do a Boston Southie accent a la Amy Adams (also opposite Wahlberg) in “The Fighter”. I give “Spenser Confidential” a 4 out of 10. (111 minutes on Netflix)