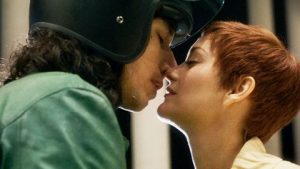 There are plenty of bad movies. You’ve seen them every time you’ve browsed Netflix or any other streaming service in frustration and had to scroll past hundreds of them. Or you could just check the IMDb page of Rob Schneider.

The plot is relatively simple. Adam Driver plays Henry, a standup comedian, and Marion Cotillard plays Ann, an opera singer. They have a relationship, get married, and she gives birth to a child, Annette, who is played by an animatronic puppet who looks like Chucky from the “Child’s Play” slasher movies. Things get turbulent in the adult relationship for no reason whatsoever, and Ann dies on a yacht in a storm a la Natalie Wood. Henry discovers Annette can sing and exploits her abilities for fame and fortune over the objections of Ann’s accompanist-turned-conductor, played by Simon Helberg (best known as Howard on “The Big Bang Theory”).

Oh, did I forget to mention that “Annette” is a musical? That’s a problem when you have actors who can’t sing well, like Driver. I remember when “La La Land” was released, some critics slammed it because Emma Stone and Ryan Gosling weren’t professional singers. But they were certainly good enough — especially Stone — and far better than the stars of “Annette.”

To make matters worse, the songs — by Ron and Russell Mael, brothers from the rock band Sparks — are horrible, with lyrics like “We love each other so much” repeated over and over again. I’m not talking about a chorus; that’s pretty much the whole tune. The same for songs made up almost entirely of “We’re traveling around the world” and “I am a good father.” There’s nothing clever or melodic about any of them, which sound as if written by a four-year-old who has just discovered pattern recognition.

If I were still on the air, I’d use this movie’s songs punishment music during the Harris Challenge. You’ve heard of people walking out of a musical with the tunes still echoing in their heads? If anyone remembers anything from this soundtrack, it will be in their nightmares.

As for Henry being a comedian, you couldn’t tell by his short theatrical scenes, which were so unfunny and so badly developed I wonder if the Maels (who wrote the script) and director Leos Carax have ever seen a standup on stage. In “Annette,” Henry is supposedly performing a one-man show called “The Ape Of God” that is nothing more than the belligerent ranting of a white guy whose privilege is barely concealed, but whose talent is wholly questionable.

The movie is so Henry-centric that Cotillard’s Ann is given little to do other than two or three short opera scenes and one naked sequence in bed during which Driver goes down on her while singing.

As for Helberg, “Annette” marks a second movie in which he’s played a pianist who works with a woman who doesn’t sing well — the other being Meryl Streep as “Florence Foster Jenkins.” While that movie had both humor and pathos, this one is so lazy his character isn’t even given a name. He’s just the conductor guy.

The listed running time for “Annette” is 2:19, but it seems interminable. At one point I closed my eyes and wished for the supernatural ability to have the end credits roll — but when I opened my eyes, no, the damn thing still went on for another hour.

At the screening I attended, only 40 people were in the theater and 9 of them walked out. I thought of joining them but, even though staying was torture, I kept telling myself at least I’d have fun writing this review. I’m here to tell you it wasn’t worth it, just a steaming pile of pure arthouse dreck.

I’m giving “Annette” a 1 on a scale of 10. Opens in theaters today, then begins streaming on Amazon Prime Video on August 20th. You’ve been warned. When it debuts there, you might want to avoid turning on your TV entirely so you don’t risk seeing even a piece of it.