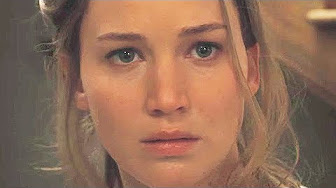 After seeing Darren Aronofsky’s “Mother!” I walked out of the theater not sure what I had just seen, but confident that I hated it and will find a place for it on my Worst Movies Of 2017 list.

The plot starts with Jennifer Lawrence and Javier Bardem as a couple living in a big Victorian house with not much around them except a meadow and some trees. He’s a poet with writer’s block. She’s fixing up the house on her own. One day, there’s a knock on the door and Ed Harris stumbles into their lives. It turns out he’s a fan of Bardem’s, who allows Harris to spend the night. The next day, Michelle Pfeiffer shows up as Ed’s wife and moves in, too.

Lawrence doesn’t understand why her husband allows these complete strangers into their personal space and walks around with a puzzled look on her face. That look changes to horror when the couple’s two sons show up, a fight breaks out, and someone ends up dead. During all of this, Bardem does nothing to stop anyone while Lawrence screams. From there until the end of the movie, that’s all you get from either of the leads — apathy from him and terrified panic from her.

This is the kind of movie where, when Lawrence goes to the basement and sees blood dripping down the walls, she doesn’t tell anyone about it. Is it a horror movie? Is it a metaphor for writer’s block? What the hell is it?

I don’t know, and I don’t care. I did sympathize with Lawrence, however, because she’s trapped in that house with something terrible taking place — just like I was trapped in that movie theater for two full hours with a terrible movie unfolding in front of me.

“Mother!” is self-indulgent (note the exclamation point in its name), it’s too long, and it’s unsettling to see such good actors locked into a script that takes them nowhere.

The movie shares its title with a movie Albert Brooks made in 1996, in which he plays a grown man who moves back in with his mother, played by Debbie Reynolds. It was not one of Brooks’ best (e.g. “Modern Romance,” “Lost In America,” “Defending Your Life”), but you’d be better off watching it five times than having to sit through this “Mother!” even once.