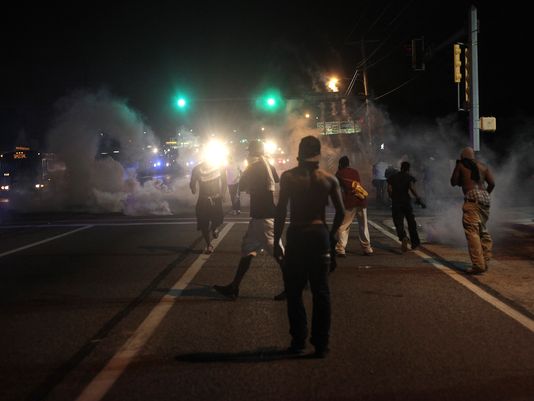 At lunch today, my friend Andy offered an interesting observation on the Ferguson story, which I’ll paraphrase: in the United States of America, change is not brought forth by fighting in the streets — change is a result of voting for our leaders or via the judicial process. He’s right, which is why protesters should stop chanting, “What do we want? Justice! When do we want it? Now!”

You don’t want justice now. Our justice system works slowly. Sometimes it gets things wrong, but speeding it up won’t help. Fast justice is the way it worked in the old west, where someone suspected you of stealing his horse, and the next day you were hanging from a rope.

Justice takes time. Investigations take time. Is everyone who does something bad prosecuted? No, and those who are prosecuted aren’t always found guilty, even if they committed the crime (sometimes they’re found guilty when they haven’t, too). But demanding that prosecutors reveal what they know, and that they race to an arrest or indictment before they’ve compiled all the facts (or a version thereof), is not the answer. The volume of the mob in the street must not be a factor.

Witness testimony, notoriously unreliable, must be vetted. Science, in the form of forensic pathologists and others must play a role — but releasing bits of information, from a partial autopsy or the unrelated videotape of a shoplifting, can easily taint the memories of witnesses and increase the heat under public’s emotions and turn a simmer into a full boil.

There are plenty of Americans who have armed themselves, not out of fear of other Americans, but because they think the government is coming to get them. I wonder what they’ve been thinking as they watched the heavily armed SWAT teams and snipers rolling down West Florissant Road in Ferguson in armored vehicles.

Do the open-carry advocates think that if the government was really after them, they’d be able to take it on? Have they not seen the tanks and MRAPS, not to mention the aircraft (manned and unmanned), that make up the government’s arsenal — now even at the local level? And don’t hold Cliven Bundy up as an example of a rebel rancher who made the government stand down. If federal agencies wanted him and his followers dead, they’d be dead, no matter how many white supremacists showed up.

Speaking of white supremacy, how different would this story be if two-thirds of Ferguson were white, and all but a few of the cops were black? Think the conversation might be a little different?

The biggest problem in Ferguson last night was not the peaceful protesters, but the looters and anarchists out to make trouble, to force a confrontation. I doubt that the National Guard’s presence will change that, and because I’m old enough to remember the Kent State shootings, I worry that the presence of more armed personnel may end badly.

As far as the media goes, they were close to useless Sunday night. The TV cameras will always be pointed in the direction of the brightest light, because they need pretty pictures, but with reporters kept in a “media holding area,” they were too far from the action to offer a valid perspective. Worse were the TV correspondents who stayed inside their cars with the vents closed because of the tear gas, so they could only tell us what was happening within a few feet of their vehicles.

Still, I’m amazed that law enforcement continues to threaten the media with arrest or worse. There was the now-infamous moment last night when a guy shooting video for a livestream was told by a cop pointing a rifle at him, “Get that light off or you’re getting killed with this!” There’s no circumstance under which a reporter should be threatened with bodily harm by law enforcement while covering a story. Did that cop not understand that he would immediately become the story, that the video would go viral in seconds? Do the cops who arrested the reporters from the Washington Post and Huffington Post last week have no command orders or training in how to handle the media?

It’s one thing to take on a line of anarchists throwing Molotov cocktails and bricks. It’s another to expose your overzealous lack of professionalism to the Twitterverse.