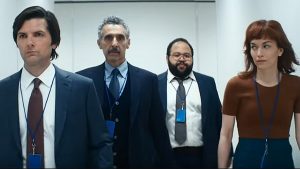 I was wrong about “Severance.” A few weeks ago, I wrote that I had given up on the Apple TV+ show because it seemed to be going down the “Lost” path. That is, raising more and more questions about what was going on as the plot got more complex without providing viewers any answers. But two friends who loved the show encouraged me to watch the remaining four episodes, and I’m glad I did — especially the season finale, which revealed just enough to pull me back into the storyline. Now I can’t wait for season two, even if I still don’t know what the hell is happening half the time.

Two weeks into its existence, CNN+ isn’t the hit it was hoped to be. One report by Alex Sherman of CNBC says fewer than 10,000 people are using the service on a daily basis. Meanwhile, Sara Fischer at Axios reports that ownership is already considering drastic cuts to the streaming service’s budget — to the tune of hundreds of millions of dollars. The whole idea of CNN+ seemed like a boondoggle from the beginning. News consumers have never shown a desire for special features and shows like those it delivers. Spending millions to wrangle Kasie Hunt away from NBC and Chris Wallace from Fox News Channel ignored the fact that those names mean very little to the public at large, and thus have no drawing power.

What CNN+ could have offered was full-service newscasts around the clock, built on the “Morning Express With Robin Meade” model on HLN (which was once called CNN Headline News), offering continuous thirty-minute blocks programmed like all-news radio. Instead of being filled with opinion hosts and panels of pundits, it could be a fairly rapid-paced presentation that never dove too deeply into any single story, but gave viewers an easy way to catch up on what’s happening right now. When there was Breaking News (and I mean truly breaking news, not Wolf Blitzer’s overuse of that term to describe every single thing in his newscast), CNN+ could merely duplicate the coverage from CNN or incorporate it into its own news wheel.

Apple TV+ began streaming Friday Night Baseball last week and, although I couldn’t care less about the sport, I punched it up to see how it looks. First, it was nice to hear a female play-by-play voice, Melanie Newman. Second, the HD picture was outstandingly clear. And third, the screen wasn’t overly cluttered with graphics. I also liked the fact that Apple TV+ offered simultaneous feeds when the early and late games overlapped. I wonder whether there will be further added innovations akin to what ESPN did last season with its Monday Night Football alternate feed featuring Peyton and Eli Manning, and Amazon’s offering audio options with different announcers during Thursday Night Football. Overall, I was impressed by the product, which is produced by Major League Baseball’s TV division. It’s not enough to make me a baseball fan, but as a media observer, I might give it another look later in the season.

Speaking of Amazon, it announced yesterday that it has rebranded IMDb TV as Amazon Freevee. I don’t know why they didn’t go with something like Prime Video Free or why anyone needs another ad-supported network showing old movies and shows that are available in myriad other places. On top of that, the service’s TV reruns aren’t even on-demand. The stream is broken down into individual channels with programming on a pre-arranged schedule, a la linear TV. So, if you wanted to watch, say, “Forensic Investigators,” you’d have to find the Amazon Freevee channel called Reel Truth Crime, and start watching at exactly 9:05pm. One of the things that has made cord-cutting more popular has been the ability to watch what you want when you want, not when someone else decides it’s on. Besides, my wife thinks Freevee is a stupid name.

I suppose that even if Freevee ends up being a big waste of money, it’ll amount to mere pocket change for a company the size of Amazon.