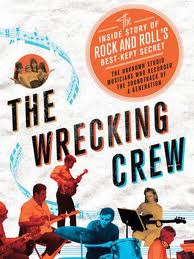 I just finished Kent Hartman’s biography of The Wrecking Crew, the group of Los Angeles studio musicians who played on hundreds of songs between 1960 and 1975, including dozens of number one hits.

Glen Campbell and Leon Russell were two of the few Wrecking Crew members who became famous as solo artists, but you’ve heard all of the rest on more songs than you know. They backed up everyone from Sonny & Cher to Frank Sinatra to the Mamas & Papas to Johnny Rivers to the Fifth Dimension. They played all of the original Monkees songs, and hits by Gary Puckett & The Union Gap, the Grassroots, the Carpenters, the Partridge Family, the Crystals, the Ronettes, Gary Lewis & The Playboys, and many others. They helped Phil Spector create his Wall Of Sound.

The Wrecking Crew often took the place of band members who weren’t as talented as they were, because producers knew they’d provide the necessary sound, as well as offer suggestions on how to make songs better. While the bands may have played live at concert gigs, studio sessions were different because of the demands on studio time; the need to get it right and move on. So that was The Wrecking Crew on The Byrds first hit, “Mr. Tambourine Man,” (Roger McGuinn was the only band member allowed to play in that session, and Hartman documents how that caused a major rift in the group).

They even recorded most of the Beach Boys tunes. While Mike Love, Carl Wilson, Dennis Wilson, and Al Jardine were touring the country non-stop for several years, Brian Wilson would stay home, write new songs, and record the tracks with The Wrecking Crew. That’s how the historic “Pet Sounds” album was created. Every once in awhile, the boys would come off the road to add their vocals, but pretty much every surf record of that era (including those by Jan & Dean) wasn’t actually played by any Beach Boy — or, at least, the ones that the public knew.

Hartman’s book includes a great story about the sessions for Simon & Garfunkel’s landmark “Bridge Over Troubled Water,” including the contributions made by pianist Larry Knechtel (who came up with that iconic opening, for which he won a Grammy) and drummer Hal Blaine (who played on over 35,000 songs in his four-decade career, including 50 number one hits and over 150 top ten hits):

Blaine stepped out to his car and brought in a set of snow chains from his trunk. Spending the next few hours on his knees in an old microphone storage room, Blaine alternately slammed the heavy-duty galvanized steel links onto the cement floor while being remotely recorded. Drag on one, smack on two, drag on three, smack on four. The brilliant maneuver ended up being incorporated as a dramatic percussion element from the song’s third verse all the way through to its epic conclusion.

You’ll hear it next time you listen to the song.

LA wasn’t the only place studio musicians were making huge contributions to pop music. The Funk Brothers played on almost every Motown hit (the documentary “Standing In The Shadows Of Motown,” which features their work, pops up on cable TV every couple of months), the A-Team in Nashville played on tons of country songs, Memphis had a group of session all-stars at Stax/Volt, and New York had a similar compendium of great session artists.

None of them got credit when the singles and albums were released, so Hartman’s book serves not just as a musical history lesson, but as a tribute to the men and women who helped create the soundtrack of a generation.