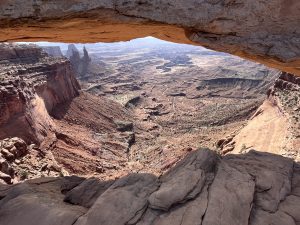 Nobody warned us about the wind.

My wife and I just spent three days in Moab, Utah, the closest town to two national parks I have long wanted to visit: Arches and Canyonlands. Their nomenclature must have come from the park service’s Obvious Names Division, so you know what to expect when you get there — but not everything.

We started planning the trip in the summer of 2019, with the hope of going in May, 2020. Because of the COVID-19 pandemic, we had to postpone for a year, and then another year. But it gave us plenty of time to research where to stay, what to do, and which parts of the parks would top our must-see list.

But in all the websites and guidebooks we perused, there was not a single mention of the wind that blows in that part of the country. In fact, after our first day of exploring, I asked a waiter at dinner if it was always so windy in the springtime. He replied yes, and in summer, fall, and winter, too. Having that information would not have kept us from making the trip, but it would’ve been nice to have been prepared. I’m not sure how, but at least we’d have had that knowledge.

I’m not referring to a light, occasional breeze. We encountered steady winds of 15mph, with gusts up to 50mph. We could feel it everywhere we drove, on the sidewalks of downtown Moab (all two miles of it), and outside our hotel windows.

It was a good thing we had chin straps holding our big, floppy, keep-the-sun-off-our-necks hats on our heads, or the wind would’ve knocked them right off. Of course, when tied on, the gusts almost picked us up like Sally Field in “The Flying Nun.” OK, that would have taken a really strong wind, since I weigh three sister Bertrilles (a common unit of measure on 1960s sitcoms), but you get the idea.

Wind like that isn’t much of a factor in our day-to-day life, but when you’re mere feet away from the rim of a canyon that drops down 1,400 feet, it makes you want to take a few more steps back. It also kicks up a lot of the sand and dust, causing Tasmanian Devil-like swirls and sending tumbleweeds, well, tumbling across vast prairies and roadways.

All that dust in the air is an irritant to eyes and noses. Fortunately, we still had the masks we’d worn on our flights. It felt more than a little odd to wear them while hiking outdoors, but they made a difference.

I was surprised that with all that energy being blown around there weren’t more wind farms. I don’t mean in the parks, but in the open fields and farmland nearby. We did spot one, but it seems like there’s a major power-creation opportunity being missed by not having more.

The purpose of writing this wasn’t to complain, because we ended up having a great time on our first trip to Utah and those national parks. But now that this piece is online, perhaps someone will come across it and learn about an aspect of that area they hadn’t known about.

Either that, or the state could change the slogan on its license plates from “Life Elevated” to “And You Thought Chicago Was Windy?”