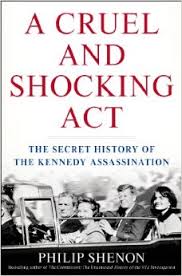 For 50 years, conspiracy theorists have gone crazy over the assassination of President John Kennedy. In his new book, “A Cruel and Shocking Act,” investigative reporter Philip Shenon not only debunks all those theories with the facts of what happened that afternoon in Dealey Plaza, but also lays blame at the feet of the politicians and other authorities who made mistakes that allowed the theories to flourish.