Where America Is Vulnerable To Attack 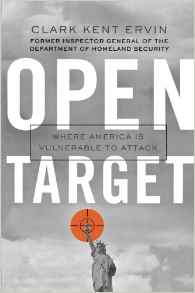 Here’s my conversation with Clark Kent Ervin, who was the first Inspector General of the Department of Homeland Security and now criticizes that agency for not doing all it can to make America safer in his book, “Open Target: Where America Is Vulnerable To Attack.”

He questioned why only 6% of the cargo at our ports is screened for radioactive material, while Hong Kong — the world’s busiest port — checks 100% of those containers. You’d be surprised at how inexpensively he says it could be done here, too. He also revealed how easy it has been for GAO investigators to get radioactive material and bomb parts through our borders and airport screening points.

Most shocking is the reaction of those at the top, including his superiors who, rather than fixing the problems, chastised Ervin for pointing out weaknesses in America’s security — the very holes they were supposed to plug, the very reason that 22 federal agencies were merged into one new one, the Department of Homeland Security. Not surprisingly, politics gets in the way of doing the job properly.

Ervin also put the lie to the claim that DHS “must be doing a good job, because we haven’t been attacked since 9/11.”