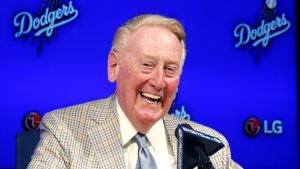 Vin Scully announced yesterday that he’ll return as the broadcaster for the Dodgers next year — for his 65th season. No other broadcaster has ever done the job as long, or as well. Sure, St. Louis had Jack Buck, Detroit had Ernie Harwell, Chicago had Harry Caray — but even they would all bow down to Vin.

I’m not a big baseball fan. I never go to Cardinals games, and only see them when they’re on the TV in a poker room while I’m playing. But as a broadcaster, if I’m on vacation driving around in Los Angeles during baseball season, I’ll put the Dodger game on the radio just to hear Vin.

He’s so good, he works alone in the booth — there’s no color analyst necessary when you have a man with his depth of knowledge and his storytelling ability. In fact, I’d argue that it’s the latter that has kept audiences enthralled even more than some of Vin’s historic calls. Yes, he was there for Sandy Koufax’s perfect game, Hank Aaron’s 715th home run, Bill Buckner’s World Series error, and so many other famous moments — and he not only chose the right words, but also knew when to be silent and let the TV cameras or radio microphones soak up the crowd’s reaction, sometimes for a full minute or more.

Yet, it is the everyday Vin Scully broadcasts that make him a legend. Considering the pace of baseball, the person behind the microphone has to fill a lot of time. The mark of a great baseball broadcaster is what they do in the booth during a boring game, when it’s 7-1 in the eighth inning, most batters aren’t even getting on base, and so many fans have left the stands and headed for their cars that the hot dog vendors are yawning. And that’s where Vin shines. He knows all the players, the managers, the owners, and the history of the game. He shares stories about all of them — and when there’s still dead time, he’ll talk about where he went to dinner, or who he met last night, and always make it entertaining.

Still, ask Dodger fans for their favorite Vin Scully broadcast, and they’ll usually remember game one of the 1988 World Series, where Kirk Gibson’s home run seemed like a scene right out of “The Natural.” You’ve probably seen that video dozens of times, but what you may not know is the back story, which Vin shared with an assemblage of Dodger fans a few years ago…

That’s classic Vin Scully. He even took his time telling that story.