Vente’s Ready, If You Want It 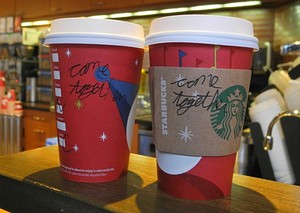 From an ABC News report today: The world’s biggest coffee chain is asking employees at cafes in the Washington, DC, area to scribble the words “Come Together” on cups for drink orders. Starbucks CEO Howard Schultz says the words are intended as a message to lawmakers about the damage being caused by the divisive negotiations over the “fiscal cliff.”

Well, that should do it. Surely, members of Congress will put aside their differences once they’ve received the coded messages from baristas around town. Except that Congress isn’t in DC right now, and when it is back in session, the gesture will have no effect.

It’s ironic that Schultz would choose the title of a John Lennon song for his fiscal cliff publicity stunt, because I’m reminded of Yoko Ono recently taking out yet another full-page ad in the NY Times declaring “War Is Over If You Want It,” just as she and Lennon did 40+ years ago during the Vietnam War. In the intervening years, if there’s anything we’ve learned about war, it’s that wanting and wishing won’t make it stop.

I don’t drink coffee, so I’ll never be in a Starbucks to see this play out, but I’d like to compare the baristas’ scribblings as the work day goes along. I’d bet they’re writing “Come Together” clearly at the beginning of their shifts, but after four or five hours, it’ll look more like a prescription written by a harried physician: “Cami Tgrelfer.”

Your vente frapuccino is ready, if you want it.