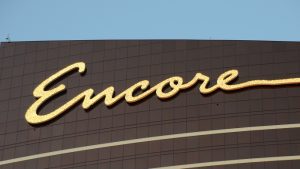 I spent last weekend in Las Vegas, staying and playing at the Encore, where the poker games are just as good as at Bellagio and Aria, but the tables aren’t as crammed together, so it’s more comfortable. Plus, next to the poker room, there’s a Chinese restaurant where I’ve never had a bad meal (with good dim sum, too!).

Here are a few stories from my trip:

Just steps away from the front desk at Encore, there are a half-dozen kiosks that handle the whole check-in process in mere minutes. Yet there was still a long line of people waiting — for at least a half-hour — to get to the front desk. I noticed the same thing at check-out, which took me about 90 seconds at the kiosk. The automation emailed me a copy of my bill (or folio, a word no one outside a hotel uses) and I was in a cab to the airport 3 minutes later.

Speaking of cabs, they now charge a flat rate from strip hotels to McCarran Airport, and it’s about the same as what Lyft charges. The problem is that the number of taxi drivers in Vegas has dropped dramatically, and there’s no longer a long queue of them waiting at the hotel cab stands. So, in many instances, the ride-sharing companies are a better option.

I had planned on also going across the street from Encore to Resorts World, where I had played a couple of sessions in October when it was fairly new. I’d found it very comfortable and well-run, but this time around, it had very few games and none that I wanted to play, so I didn’t walk over.

Instead, I cabbed down to Aria, where I got into a very lively game for a few hours. When I was done, I made my mandatory stop at Secret Pizza, the place on the third floor of the nearby Cosmopolitan that has the best white pizza I’ve ever had.

Afterwards, I wanted to get some exercise, so I opted to walk the two miles back to Encore. Considering the 91° heat, that was probably not a smart decision, which I realized after a few blocks. After that, I ducked into every casino I could walk through along the way, enjoying the air-conditioned breaks from the heat. I also was happy to see a guy selling ice cold bottles of water for a buck on one of the many overpasses, and downed it for some blessed relief. Upon returning to my room, completely exhausted, I collapsed on the bed until my body temperature returned to normal, and was happy to see that my hatless bald head hadn’t gotten sunburned.

As I made the trek, I felt sorry for the people who dress up as characters and stand around in front of Planet Hollywood, Bellagio, and Harrah’s, trying to convince tourists to pose for a picture with them and pay for the privilege. It would be bad enough to be in the Mickey Mouse, Elmo, and Buzz Lightyear costumes, but I would least want to be dressed up as Chewbacca in that heat. On the other hand, there are always pairs of faux showgirls without much on, including one young woman who had nothing on top except electrical tape over her nipples. To appeal to horny handymen, I suppose.

Here’s a travel tip for you. If you’re looking for a good way to ruin a pair of wireless earbuds, do what I did one morning at the Encore pool. After laying out on a chaise lounge for a while listening to a podcast, I decided to do a few laps in the mostly-empty pool. The water was remarkably warm and comfortable, but I didn’t notice until I got out that I had forgotten to take the buds out of my ears. Electronics + chlorinated water = ruined, damn it!

Everywhere I went, I was happy to see a lot fewer smokers than I’ve encountered in the past in Las Vegas. It wasn’t that people wore masks — virtually nobody (including me) had them on, except at the airport — but I can’t remember ever being able to walk through casinos and not have my clothes end up smelling like an ashtray. Out on the sidewalk, the air was more often befouled by stink weed than tobacco.

Speaking of the airport, this was the first time I’d seen the drinking fountains operational since before COVID. And, as I was waiting for my return flight, an obnoxious, whooping alarm started blaring. Then came the announcement: “Your attention please! An alarm has sounded. Please remain calm and stand by for further instructions.” OK, but if we’re not supposed to do anything, why get our blood pressure up with that annoying audio? That was followed about ten minutes later with another announcement: “Attention, your attention please. The building emergency condition has been cleared. You may return to your normal activities.“

At no time did I see anyone doing anything but their normal activities, so why bother us if there was nothing wrong?