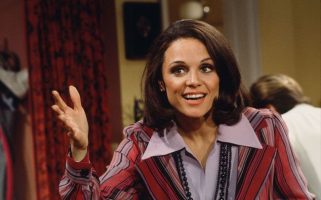 When I heard Friday of the death of Valerie Harper at age 80, I went to my archives to dig out a conversation I had with her in February, 2006. Best known as TV’s Rhoda Morganstern, she was touring that year in “Golda’s Balcony,” a one-woman show about Golda Meir.

We discussed what it’s like to play a real person on stage, how stage performing is different from doing a three-camera sitcom, and how Golda Meir was one of the most important people of the 20th century. We also talked about her classic TV character, and she revealed some behind-the-scenes stories about working with Mary Tyler Moore and the doubts she had about doing the spinoff series.

You can listen to the conversation here.