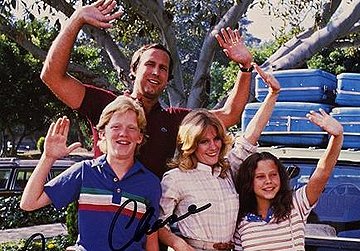 This summer marks the 30th anniversary of “National Lampoon’s Vacation,” so I invited Beverly D’Angelo (Ellen Griswold) to join me on America Weekend to reminisce about making the movie. She revealed that the ending we saw was not the original ending they shot, how much improvisation Harold Ramis allowed the cast (which also included Chevy Chase, Anthony Michael Hall, Dana Barron, Christie Brinkley, John Candy, Eugene Levy, Brian Doyle-Murray, and Eddie Bracken) to do on the set, and how “Vacation” launched the screenwriting career of John Hughes.

We did not delve into the lesser-quality “Vacation” sequels, but since D’Angelo also played Babs Miller on “Entourage,” I asked her about rumors that there will be a big-screen movie from the show, and talked about another of her upcoming projects, “Bounty Killer.” Listen to our conversation here.