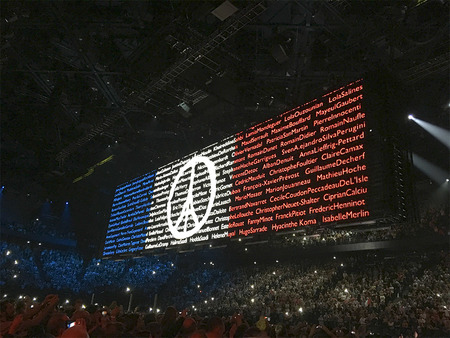 I just watched U2’s “Innocence and Experience” concert on HBO. That’s the show which was originally scheduled for November 15, but postponed because of the terrorist attack in Paris two days earlier. It finally took place on December 7th, and was nothing less than stunning.

The only time I’ve seen U2 in person was on May 10, 1983. I was doing the morning show at WHCN/Hartford, and our midday guy/music director Bob Bittens convinced me to go to New Haven with him to see the band in a small concert hall at Yale University. We had been playing U2’s music on the air for several months and I liked what I heard, but I wasn’t prepared for how good they were live. It was Bono’s 23rd birthday; he was in great voice and quite a front man — at one point he literally climbed the wall into the balcony for a couple of songs.

Since then they’ve cranked up the showmanship a thousandfold. They’ve played stadiums and arenas around the world and understand how to entertain on that massive scale. But everything they’ve done before was nothing compared to the show they put on in Paris. I was going to write a full summary of the HBO telecast, but my friend Nolan Dalla already said it:

The three-week delay only heightened public anticipation and made the moment all the more poignant when the four members of U2 finally took to the stage and launched into a riveting 2 hour and 30 minute concert that was equal parts musical, political, tutorial, and spiritual. The sequence of songs performed — lots of new material, infused with the expected classics — hardly mattered. It was seeing U-2 at the height of their creative powers take to the stage once again where they seem most at ease, commanding the room as they do best, bringing fans of all ages to their feet, and beaming an impenetrable wall of sound and creative energy which dazzlingly radiated as “Je Suis Paris” to the entire world.

Sure, the music was great. But the real star of this concert might have been the stage. That’s right. Eclipsing a 35-year catalog of all-too-familiar hits and plenty of new material of their most recent releases, U2’s massive concert stage the size of a football field has now blown the roof off the conventional concert experience and set a new standard of disbelief. It’s not just the intricate layout and jaw-dropping size and scope of the wall to wall technology that’s mind blowing. U2’s use of an imposing screen which somehow melds onto the long runway trafficked back and forth by band members (singer Bono, guitarist the Edge, bassist Adam Clayton — drummer Larry Mullen, Jr. doesn’t move from his spot, obviously) becomes musical “virtual reality” on an unprecedented scale. This isn’t just a live performance. It’s a full blown immersion for the senses.

For those who don’t have access to HBO TV or won’t get the chance to see the way U2’s stage is configured, allow me to describe it. Imagine a basketball arena. The conventional rock band setup (drums, guitars, microphones, speakers) is placed at one end of the court. The other end on the opposite side of the court — perhaps 300 feet away — has an large oval area, which allows Bono and the other band members to perform, when they so please. The two stages are joined together by a lengthy runway like at the Miss America pageant, which extends straight down the middle of the court. Naturally, all the performers take positions at different places throughout the lengthy performance. However, during several songs, a giant double-sided video screen (actually described as a “video cage”) is lowered down onto the stage. Flashy larger-than-life visuals of the group, short interludes of subject matter matter related to songs, and creative light bursts emanate an level of energy I’ve not witnessed before, even when viewing on television.

It made for remarkable television. The U2 Paris concert is being rerun several times this month on HBO. Catch it if you can.