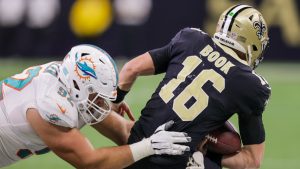 Years ago, when I used to wager on football games, one of the trends I followed was to bet against rookie quarterbacks in the first half of their first four games. The reasoning was that the newbies, no matter how good they were in college, have never seen the kind of speed NFL defensive ends possess. The guys who have been in the league for years are the cream of the crop — even on the worst teams — and they’ve only gotten better.

For proof, just look at what happened to Ian Book the other night. He’s the umpteenth-string quarterback for the New Orleans Saints. With both Taysom Hill and Trevor Siemian unable to play because they’d tested positive for COVID, Book had to step up from the sweater-and-clipboard brigade. When you’re that low on the depth chart, you rarely get bumped in the hallways during training camp, let alone tackled by a 250-pound lineman running full speed. Sure enough, on his first series, Book was forced out of the pocket and had to scramble. In his time at Notre Dame, he was probably among the fastest guys on the field, so he could escape by running around the right side while looking downfield for open receivers. But our boy isn’t in college anymore, as he quickly discovered when he was tackled for a loss. That was one of eight sacks Book had to endure, as well as two interceptions and who knows how many times he was hurried and/or knocked down.

All of that happened at the hands of the Miami Dolphins, a so-so team whose defensive linemen I could swear I saw drooling every time they lined up against Book. The Dolphins were favored by 3, but went on to win by 17, allowing the Saints to score a mere field goal along the way. Too bad I didn’t have any money on the game.

The other recent football betting line I noticed was when Army played Bucknell last month. I visited the Bucknell campus in the early 1970s when my father was driving me around to check out colleges I might apply to (I was actually accepted, but chose to matriculate elsewhere). Bucknell was — and is — a small liberal arts college in the hills of Pennsylvania, not exactly the place you’d expect to find a football powerhouse. That might explain why Army was favored to win the game by fifty points.

Whose idea was this? Granted, the players from West Point are only cadets, but as soon-to-be members of the mightiest fighting force in the world, they should be able to pound a bunch of economics and political science majors who — at the time — had managed to win just one of their nine games. Come to think of it, why were these two schools even on the same football field? Was it the Bully Bowl? Bucknell was used to playing Lehigh, Colgate, and Fordham. Army, meanwhile, played against bigger athletic programs from Wisconsin, Georgia State, and Missouri — not to mention their counterparts from the Navy and Air Force — and put up a 9-4 record.

If you have a penchant for betting on college football games and the fifty point spread enticed you to take the underdog, you lost your bet. The final score was Army 63, Bucknell 10. I didn’t see any highlights of the game, but I’ll bet that Bucknell’s quarterback had something in common with Ian Book — running for his life while being chased by very fast, very large men.