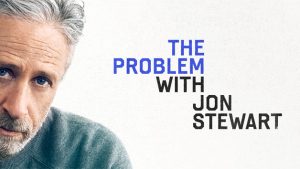 What a disappointment. Even if I suspected Jon Stewart’s return to television with an Apple+ streaming show wouldn’t be a laugh riot, I wouldn’t have guessed it would be so morbidly unfunny.

It appears that Stewart felt he should use his new platform to address serious issues, such as — in his first episode — the impact burn pits have had on the health of US veterans who served in Iraq and Afghanistan. Many of those who inhaled the toxic fumes from the pits came home with respiratory problems, cancers, and more. Meanwhile, our government — which kept telling us to Support The Troops — failed them once they got home and became ill by refusing to care for them or pay for the medical attention they needed. As I’ve said countless times before, it’s sad the way the support for the troops ends the moment they return home.

This is serious stuff indeed, but it’s not a subject that lends itself to laughter, which is what we’ve come to expect from Stewart. In the few years since he left “The Daily Show,” that series’ offspring have already carved out new turf in what Stewart refers to as “comedy hybrid shows.” The best of those is John Oliver’s HBO show, “Last Week Tonight,” which manages to address somber issues, but mixes in enough snark and silliness to keep the entire operation from being swallowed up in solemnity. Samantha Bee has also staked out a space in this realm on TBS, as did Hasan Minhaj until his Netflix show was prematurely cancelled. Like Oliver, they understood the need to inject some light into the dark subjects they discussed.

To the contrary, Stewart’s show comes off more like advocacy journalism or a segment of “20/20,” with virtually no attempt to put a smile on the viewer’s face. Instead of entertaining, Stewart’s presentation comes off as an angry lecture that makes its point in the first few minutes, then continues to pound it in over and over again. It’s not that the issues aren’t important, it’s that they don’t make for pleasant viewing. There may be an audience for such a show, but even if I do give him another shot to see how his second episode looks in two weeks, I doubt it will be appointment viewing in our house over the long term.

I also wonder why there’s an audience in the studio with him. I bet when they got tickets to a new Jon Stewart show, the attendees expected something different than what they got — witness the deadly silences that accompanied virtually the entire 44 minutes of his debut. Stewart likely felt he needed them there as a safety blanket because he’s spent his career working in front of crowds.

But an audience is only necessary if you’re playing for laughs. If the editorial direction of “The Problem” is going to be hard issues with no sense of humor, there’s no reason for him to play to people in those seats. That’s why there’s no studio audience for “60 Minutes.”