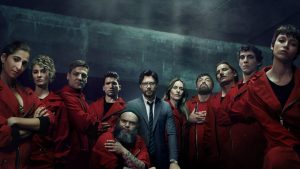 Early this year, while we were still essentially in lockdown mode, my wife and I binge-watched the Netflix series “Money Heist.” At the time, I wrote here:

“Money Heist” is a Spanish series about a group of thieves who rob the Royal Mint of Spain. They are led by The Professor, an ultra-clever schemer who recruits the crew and plans the theft down to the most minute detail. He anticipates how the police and government will react while he remains on the outside monitoring everything and switching strategies as the situation changes. It’s the sort of idea that might have been squeezed into a two-hour movie, but plays out instead over two seasons of eight episodes each — without ever feeling too long. That’s because the storyline delves deeper into the interpersonal relationships among the thieves as well as the Mint personnel who are held hostage inside. There’s also some intriguing back-and-forth communication between The Professor and hostage negotiator Raquel Murillo and her police colleagues.

We enjoyed those first two seasons enough to continue on with the third and fourth, which had the same crew trying to pull off another huge heist, this time from the Bank of Spain. While not as enjoyable as the original plot, we stuck with it. By that point, “Money Heist” had become one of Netflix’s most popular shows around the world, creating the kind of buzz and word-of-mouth recommendations that later made “Squid Game” an even bigger hit. Because of that success, the showrunners stretched the story even further, producing a fifth season, which Netflix broke in half, streaming its first five episodes in September, and its last five this weekend.

Well, we had to see what happened to all of those characters, so we jumped back into the “Money Heist” pool. Unfortunately, the first half of the new season wasn’t very good, forsaking the mental game of chess the Professor was playing with the authorities, replacing it with gunfire, explosions, and other noise. There was too much reliance on plot padding, with flashbacks that didn’t add new details to the caper, too many cuts between time periods, and the introduction of two new characters pulled out of thin air.

We almost gave up at that point, but when you’ve viewed a show for that long, you have to see how it plays out. The good news is that the final five episodes were more akin to the previous seasons, leaning on relationships within the gang and repeated frustrations for the cops. We also admired the cleverness of the resolution and the way female characters were portrayed throughout as equal to (and often smarter than) the males.

We’re glad we stuck with it, yet when I recommend “Money Heist” (and I still do), I often say, “Just watch the first two seasons and leave it there.” I’ll also add a caveat: the dubbed version is not nearly as good as watching the series in its original Spanish with English subtitles.