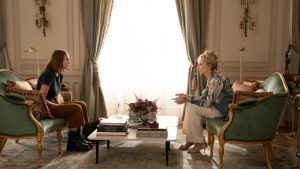 I’ve written several times how movies and TV shows about standup comedians almost always fail when it comes to scenes of the comics on stage doing their acts. The problem begins with the casting of actors who have never done standup comedy.

Acting like a comic is not the same as being one. Tom Hanks and Sally Field couldn’t do it in “Punchline.” Neither could Robert DeNiro in “The Comedian.” Seth Rogen and Adam Sandler (who used to be a standup) couldn’t do it in “Funny People.” Even Billy Crystal couldn’t make a hit out of “Mr. Saturday Night,” although he was much better at mining the bitter-old-comic turf for laughs.

Now there’s an HBO Max series, “Hacks,” in which Jean Smart plays Deborah Vance, a legendary comedian who’s been enjoying a long residency at a casino/hotel in Las Vegas, where her name’s on the marquee on The Strip. The problem is that, although Deborah has always written her own material, she hasn’t come up with any new stuff in a long time, so there are still references to people and events long forgotten (e.g. Anna Nicole Smith).

With attendance down at her shows and pressure from the casino’s owner, Deborah’s manager suggests she hire a young writer named Ava (Hannah Einbinder), who is also one of his clients, to modernize her act. Ava is purportedly in showbiz jail because of some offensive tweets, with no one willing to hire her. She detests the idea of going to Vegas to write jokes for an old hack like Deborah, who in turn doesn’t think she needs any help, especially from this annoying little nobody. But, of course, after Ava storms out of their first meeting and starts driving away, Deborah stops her and changes her mind.

Now we’re set to hear some of the brilliant new material this young upstart can deliver — except none of it is funny. Despite that, Deborah keeps her around and helps her get better, all the while continuing to do her own outdated jokes onstage. Which are also not funny. For a show that’s supposed to be a comedy about comedians, “Hacks” doesn’t even rise to the level of Showtime’s “I’m Dying Up Here” from a few years ago.

“Hacks” falls into the same rut “30 Rock” and “Studio 60 On The Sunset Strip” did — the shows-within-the-shows weren’t even mildly amusing, because writing a sitcom or drama is a different skill from creating memorable sketch comedy. Frankly, I was surprised at how bad the “TGS” segments on “30 Rock” were, considering how clever the rest of the show was, and that its creator, Tina Fey, had been the head writer for “Saturday Night Live.” If she couldn’t get it right, Aaron Sorkin had no chance.

But even mastering those two skill sets doesn’t mean you can craft a successful standup act, and that’s where “Hacks” really falls short.

The best comics have a singular voice and cadence, a style that sets them apart from everyone else who makes a living getting a crowd of strangers to laugh. Thus, there’s no confusing Wanda Sykes with Iliza Shlesinger or Rita Rudner. You wouldn’t hear the same schtick from Bill Barr as from Jerry Seinfeld or Hannibal Buress. Anyone who writes monologues for late-night TV knows not to give a joke that’s appropriate for Jimmy Fallon to Trevor Noah.

The rare exception to the actor-playing-comedian-badly trope is “The Marvelous Mrs. Maisel,” in which Rachel Brosnahan has been given superior material to work with — and showrunner Amy Sherman-Palladino does a much better job capturing her lead character’s unique point of view and sensibilities. Plus, the scenes of Midge’s stage work aren’t limited to just a couple of jokes at a time, so viewers have a chance to get a sense of her talent. “Hacks,” with episodes that only run a half-hour each, doesn’t afford Deborah that same luxury.

While none of this is the fault of Smart (who’s as good as ever), she’s only playing a standup without the benefit of ever having been one. Einbinder, on the other hand, is a professional comic from Los Angeles and the daughter of original “SNL” star Laraine Newman. But we don’t get to see her performing onstage as Ava, so I have no sense of her standup abilities.

The two leads have good chemistry, but their characters’ jaded and bitter attitudes grow weary quickly. And after watching just the first two episodes, I feel like I can map out every plot point “Hacks” will cover in the next eight that make up its first season.

That’s too bad, because as a serious fan of standup comedy, I root for all of these projects to get their subject right. I plan to watch the next couple of episodes of “Hacks” in the hope that, with its characters developed, the storylines and onstage segments will get better. But for now, I can only give it a 4 out of 10.