TV Review: “Get Back” 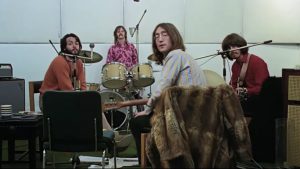 There are parts of Peter Jackson’s eye-opening documentary, “The Beatles: Get Back,” that are wonderful and others that are tedious.

The best part is seeing The Beatles in the studio, having fun while creating — out of thin air — songs destined to become classics. I can’t imagine what’s it’s like to come up with parts of a song one night, work it out with my bandmates the next day, and have the world still know the lyrics and tunes sixty years later.

The problem is that seeing that process over and over and over again is boring. There are only so many times you can hear The Beatles working their way through John’s “I’ve Got A Feeling” before you want to scream, “Enough already!” All bands go through this, as do writers, comedians, artists, and everyone else in the creative arts — but you wouldn’t want to watch Stephen King coming up with every sentence of one of his books, then going back and editing, re-editing, deleting, adding, and transposing various elements until it’s a finished product. Every standup comedy special you’ve ever seen was preceded by night after night of trying out new ideas, some of which elicited laughs, some which were so painful to watch it’s no surprise they were ditched before the cameras rolled.

I’m sure the same would be true if we’d been in the editing room when Jackson had to cut down the sixty original hours of footage shot by Michael Lindsay-Hogg’s crew. Put this in, take that out, use this audio over that visual, add this subtitle, and so on.

The problem is that the resulting eight-hour compilation is still too long. Much of “Get Back” feels like someone’s taken all the outtakes from the Beatles anthology discs, putting them in one playlist, and then set it to repeat ad nauseam. Similarly, there are several segments in which The Fab Four, Lindsay-Hogg, road manager Mal Evans, engineer Glyn Johns, and others sit around and talk business (e.g. whether they should perform their new songs for an audience and, if so, where). For the first several hours of “Get Back,” those discussions end without anyone making a decision. My wife said it reminded her of sitting through interminable meetings at her old job. Yawn!

It’s also clear from those fruitless conversations and the lackadaisical pace of work that the death two years earlier of their manager, Brian Epstein, left The Beatles with no one to impose discipline and keep them on track. Paul McCartney tried to step up into that role, but doing so caused backlash, particularly from George Harrison, who didn’t like being told what to do by someone he considered an equal. Yet, as “Get Back” goes on, it’s obvious that McCartney’s attempts (“We need a schedule!”) were absolutely necessary.

Truth be told, the “Let It Be” album was not The Beatles at their best. I don’t know anyone who names it as their favorite Beatles album (or even in the top three). Oh, sure, it has “The Long And Winding road,” “Across The Universe,” and “Get Back,” but it also has filler like “Dig It” and “Maggie Mae,” not to mention the baffling “Dig A Pony.” What the hell was that?

Fortunately, in the documentary, we also see The Beatles working on other new songs that wouldn’t get onto vinyl until “Abbey Road,” including “She Came In Through The Bathroom Window,” “Golden Slumbers,” and “Maxwell’s Silver Hammer.” There are snippets of some George songs that ended up on “All Things Must Pass” and Paul’s “The Back Seat Of My Car,” which appeared later on the album he did with Linda, “Ram.” I also enjoyed seeing tidbits of songs that might have turned into something, but remained undeveloped. One of those was Ringo improvising on piano with Paul and, when asked what he calls the song, he replies, “I Bought A Piano The Other Day.”

That’s one of the rare flashes of Ringo’s sense of humor in “Get Back.” For the most part, he remains quiet until he picks up his drumsticks and figures out the drum parts of various songs. Oh, he also smokes a lot of cigarettes. They all do. Packs and packs. The air in that studio no doubt defined the word “fetid.” Speaking of their recording space, it astounded me in watching “Get Back” that The Beatles — then the most popular performers in the world — weren’t provided with top-notch equipment for their rehearsals. How could they not have the best possible microphones, mixing consoles, and anything else they needed?

Several guests dropped by the sessions, most notably their old friend Billy Preston, who was in Little Richard’s band when The Beatles opened for him in Hamburg. Invited to sit down at an electric piano, Preston immediately started improvising fills and licks that improved the songs so much he was invited to come back every day. His contributions — and ability to fit in so easily — made the “Let It Be” album immeasurably better. What a talent.

George Martin was there, too, although his contributions were minimal. Considering how much we’ve heard about his influence on The Beatles’ recordings, that surprised me. Perhaps that’s why the final version of the “Let It Be” album was produced (and ruined, some argue) by Phil Spector.

While Maureen Starkey, Linda Eastman, and Pattie Boyd all made appearances in the studio, Yoko Ono was a constant presence, always sitting right next to John. Watching her, I couldn’t help but think how it would have been impossible for me to do my radio show every day with Martha sitting right next to me the whole time. I also could not have done it with the wife or girlfriend of one of the other members of my radio ensemble just sitting there and staring — not to mention the wailing and screaming Yoko did into a microphone on more than one occasion.

If any of the other three Beatles objected to her presence, Jackson has left it out, but I can’t imagine someone didn’t say something. Still, there’s no evidence in this documentary that Yoko was the driving force behind the band breaking up — or any impetus at all, for that matter. The truth remains the only thing that caused the dissolution of The Beatles was The Beatles. Yet, sensing public perception, Paul predicted:

It’s gonna be such an incredible sort of comical thing, like, in 50 years’ time: “They broke up ’cause Yoko sat on an amp.”

The movie climaxes with the famous lunchtime rooftop concert atop the Apple building in London, in which they ran through a half-dozen of their songs, the last time The Beatles played for an audience. In addition to multiple cameras capturing the performances, Lindsay-Hogg wisely also had three crews at street level getting the reactions of passersby, and a hidden camera in the building lobby which got the footage of two police officers awkwardly responding to noise complaints. The juxtaposition of the bobbies trying to exert authority downstairs while the band played joyously upstairs was a fitting denouement to the “Get Back” mini-series.

Too bad it took so long to get there.