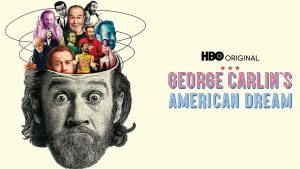 I have a few observations after watching the HBO documentary, “George Carlin’s American Dream.”

I enjoyed seeing footage of Carlin’s performances and routines, including many that I’ve heard so often I could recite them word for word. And the doc does a good job of showing how often Carlin had to pivot to change his standup act and make it more contemporary and relatable.

The thing that always impressed me most about Carlin was the precision of his language. He worked hard on making sure every word in every chunk of every monologue was just right. He’d often do a run of phrases — including his “Seven Words You Can’t Say On Television” — where the placement of each syllable mattered. Jerry Seinfeld admired that aspect of Carlin’s work, too, and wrote all of his routines with similar exactitude (and still does).

That said, I stopped being a devoted follower of Carlin’s in his last decade. By then, he had pivoted to angry and bitter, two words that do not add up to funny. Too many of his specials in that era were filled with long, humorless rants in front of an audience that was trained to laugh at pretty much anything he said. It was in those years when he would bloviate about being a fan of natural disasters, not caring about the environment, and living as a misanthrope with no need for any other humans. Boiled down, it was basically, “Fuck this, fuck that, and fuck you!”

I remember being in Las Vegas about 20 years ago, staying at the MGM Grand. On my first night there, I was walking across the casino when I noticed Carlin’s name on the theater marquee, with a sign taped up on the box office window which read, “Tickets Available.” I thought about buying one for that night, but immediately opted out because I didn’t want to sit through an hour-long lecture about Carlin’s grievances. I was kind of surprised at myself, because if it had been a decade or two earlier, I would have pounced at the opportunity. But I passed.

Carlin was only a guest on my radio show once, in May, 1997, when he was promoting his book, “Brain Droppings.” I was doing the afternoon show at WARW/Washington and had arranged for him to call in and spend about 15 minutes on the air with me. When he did, he said he was in the middle of an appearance at a bookstore, and kept interrupting our conversation to interact with fans who had bought his tome and wanted an autograph and a few seconds with the comedy legend. That’s not a good recipe for a live radio segment.

Early on, I offered my condolences on the death of his wife Brenda just a week or two before. He thanked me and said he was devastated by losing his longtime love. I pushed a little bit and asked whether it was hard for him to go from city to city hyping his book after such an emotional loss. He paused for several seconds as I waited silently for an answer. I wasn’t sure if I’d stepped over a line or he was just trying to hold it together.

Finally, he replied that it was easier for him to be out there taking care of business than it would have been if he’d sat home alone, morose and depressed. He went on for over a minute, talking quite frankly about the different ways to handle grief and his not knowing what else to do. It was one of the most heartfelt moments I’d ever experienced with any guest in all my years on the air.

Though we’d been scheduled for 15 minutes, I could tell that his mind had already gone back to the people lined up to meet him, so I thanked him after about 10 minutes and said goodbye. I never talked to George again.

I don’t have that segment in my audio archives, but I have some related material you might be interested in.

His daughter Kelly Carlin joined me in 2016 when she was promoting the paperback edition of her own book, “A Carlin Home Companion.” We also talked about a CD that had just been released, “I Kinda Like It When A Lotta People Die,” which he’d recorded two days before 9/11/01, but never distributed because of the circumstances. You can listen to my conversation with Kelly here.

Seven years earlier, I spoke with Tony Hendra, Carlin’s longtime friend with whom he’d collaborated on an autobiography, “Last Words,” which Hendra published after George died. That conversation went so well that we continued it with two more phone calls in the next week — all three of them are archived for your listening pleasure here.

At one point in the documentary, Carlin says that, for years, he wasn’t making much money as a road comic, driving from town to town to work in various comedy clubs. The expenses — fuel, hotel, meals — ate up nearly all of his paychecks, so he decided to stay in New York and perfect his routines by doing them night after night at the same club in Greenwich Village, Cafe Au Go Go. It didn’t pay as much, but it bolstered his bank account more than the out-of-town circuit did.

I was reminded of my old friend Bob Somerby, who was one of the top stand-ups in the Baltimore-Washington region in the 1980s and 1990s. I befriended Bob and had him appear on my show quite often. In fact, at one point, I hired him to come to the radio station where I hosted morning drive every day, and told him he could jump on the microphone whenever he wanted to comment on something I was talking about or do his own prepared schtick.

Bob had spent most of his career working gigs in places he could drive to in a single day — which is why no one west of the Mississippi ever saw how great he was. Being a member of my on-air ensemble gave him a steady income without the expenses of getting from place to place. Oh, he’d still book a weekend at Tom Mabe’s comedy club in Louisville, Kentucky, but he was always back in the studio with me on Mondays.

As for the four-hour HBO documentary, like most projects overseen by Judd Apatow, it’s too long. There’s a lot of padding that could easily have been cropped, reducing the runtime by an hour. Apatow devoted the same amount of time to his Garry Shandling remembrance. Considering Carlin’s career lasted 50 years while Shandling was only in the spotlight for about 15, the former certainly deserved more time than the latter, but four hours is too much for either of them.

There’s no denying that — with all of his HBO specials and such classic albums as “Class Clown,” “A Place For My Stuff,” and “FM & AM” — Carlin was a huge influence on a couple of generations of stand-ups. Even though I soured on him towards the end of his career, he rightly deserves a place in the comedy pantheon.

I give “George Carlin’s American Dream” an 8.5 out of 10. Airing this month on HBO and streaming on HBO Max.