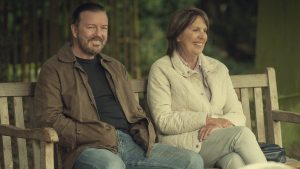 I’ve been a fan of Ricky Gervais for a long time. I laughed out loud at his HBO series “Extras,” his movies “Ghost Town” and “The Invention of Lying,” his stints hosting The Golden Globes (when they were still a thing), and his standup specials “Out Of England” and “Humanity.”

Of late, Ricky has been doing his new standup show, “SuperNature,” at some venues across Europe. It was supposed to come to the US this year, but COVID got in the way. Since St. Louis wasn’t on the itinerary in the first place, I’m looking forward to the Netflix version later this year.

In the meantime, I’ve gotten my Gervais fix from “Absolutely Mental,” a podcast series he does with Sam Harris, in which they discuss topics like “Why Do We Dream?”, “Will We Be Replaced By Robots?”, and “How Does Hypnosis Work?” It’s the only podcast I’ve paid for and, at $15/season (roughly 10 episodes each), I consider it enough of a bargain that I’m already planning to subscribe to a third season whenever they get around to releasing it.

There’s one other Gervais project on my favorites list, “After Life.” He plays Tony, a man so devastated by the loss of his wife that he doesn’t care what he says or does, which often comes off as rude and far too honest for everyone around him. Its third season dropped on Netflix last Friday, and I binge-watched all six half-hour episodes this weekend. They were a bit cruder than the first two (including repeated uses of the C word, which has a different connotation in the UK), yet I still enjoyed the hell out of it and, yes, even teared up at the end.

One aspect of “After Life” that deserves mention is that Gervais (who also wrote and directed the entire series) didn’t hire the kind of hyper-attractive people with perfect bodies you’d find in pretty much every other TV endeavor. The characters who populate Tony’s world are all regular-looking, with goofy personal problems and odd quirks that give him material to work with. On top of that, Gervais populates the soundtrack with such classic tunes as 10cc’s “The Things We Do For Love” and Joni Mitchell’s “Both Sides Now.”

Like many of Gervais’ other shows, “After Life” could be described as a cringe comedy, in the same category as Larry David’s “Curb Your Enthusiasm” and Ricky’s own “The Office.” But it’s also remarkably romantic and truly poignant at times. For example, I don’t know that I’ve heard a better line from a man mourning the loss of his wife than when Tony says, “I don’t miss doing things with her. I miss doing nothing with her.”