Turkeys Don’t Fly, But We Did 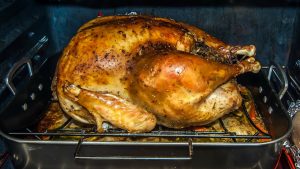 My wife and daughter and I traveled to the Washington, DC, area over Thanksgiving weekend to spend time with my brother, Seth, and his family for the first time in more than two years. We spent plenty of time catching up and sharing stories, as well as eating the magnificent food prepared by my sister-in-law, Karen (including some vegan options for our daughter).

We kept the trip short because Martha refuses to be part of the outsized herd that travels the day before and the Sunday after Thanksgiving. So, we flew there Thursday morning and back Saturday evening, when the airports were busy yet manageable and our flights were not full. I was also glad we did not have any idiot anti-maskers making a stink onboard. In fact, I’ve been on a dozen flights in the last four months with nary a negative occurrence. I know that the absence of trouble will never become a headline, but considering how many jets are in the air every day, it’s dumb to focus on the tiny minority of incidents that never work out well for the instigators.

On our flight home, I was seated in an exit row while a flight attendant stood next to me watching passengers putting bags in the overhead compartment. Noting that she repeatedly shook her head at what she was watching, I asked what she was thinking. She replied, “I’m gonna have to fix that bag. That door won’t close. This one should’ve been gate-checked.” She laughed and added, “I’ve lost track of the number of times I’ve said to myself nope, nope, nope!” But she doesn’t address each problem as it happens because that would clog the flow of passengers getting into their seats. When they’re all buckled in, that’s when she goes up and down the aisle fixing the poorly stowed luggage.

One last note from our DC weekend. While in the car, I turned on a radio station I worked for more than 25 years ago. It still has a rock format, but it’s so overloaded with commercials, I don’t know how it expects to maintain any decent level of Time Spent Listening, a key metric related to ratings. At one point, the station played 8 minutes of commercials in a row. Eight minutes!!! And that break wasn’t made up solely of sixty-second spots. There were tens and thirties mixed in, which means that, in all, there were more than a dozen non-music elements. They were broken up in the middle by a recorded 15-second weather report, but it only existed so sponsorship announcements could run adjacent, thus adding to the clutter. It’s no wonder my brother told me he never listens to terrestrial radio anymore. He’s far from alone.