My wife and I went to New York City last week to celebrate with our daughter as she received her Master’s Degree from NYU. While there, we took in three Broadway shows, and I’m happy to report they were all terrific. 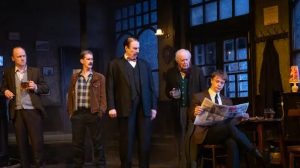 We began with “Hangmen,” written by Martin McDonagh, who also did the script for the movies “Three Billboards Outside Ebbing, Missouri” and “In Bruges.” The play is a black comedy that begins with the 1963 hanging of Hennessy, a man accused of raping and killing a young woman, who maintains his innocence till the very end. Harry Wade, the country’s second-most famous executioner, is there to pull the lever that sends Hennessy to his death.

Then the set changes dramatically as we move to 1965. By now, the death penalty has all but been eliminated in England, so Harry spends his days running a pub with his wife, Alice, and their 15-year-old daughter, Shirley. The bar is populated by a quartet of regulars and a newspaperman trying to get Harry to open up about his old profession on the second anniversary of Hennessy’s hanging. Harry insists he won’t discuss those matters, right up until he takes the journalist upstairs to the Wade’s apartment, where he spills all the beans he can.

Meanwhile, an interloper named Mooney enters the pub. He’s a quick-talking sort who comes off like a con man on the make; his mere presence disrupts the normally tame discussion among the regulars. Mooney also has a quick temper, which he displays to the horror of Alice, who becomes even more concerned about him when Shirley takes a liking to this stranger.

To tell you more would be to tell you too much, but by the time this protagonist/antagonist relationship has been established — along with the return of Harry’s bitter former assistant, Syd — there’s plenty of drama to go around. Fortunately, “Hangmen” is also very funny, even during its darkest moments.

It took us several minutes to get used to the northern English accents of the characters, but once our ears became attuned, we had a great time (even though we were not familiar with any of the actors). 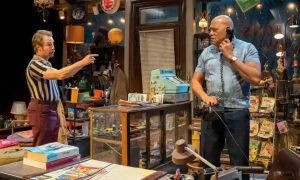 The next day, we went to see a revival of “American Buffalo,” David Mamet’s 1975 drama about three losers in a junk shop planning a petty crime. We almost didn’t get tickets to the play because we detest Mamet’s recent swing into right-wing extremism, but we couldn’t resist when we heard the cast consisted of Laurence Fishburne, Sam Rockwell, and Darren Criss.

With front-row seats in the Circle In The Square theater, the actors were often a mere four feet in front of us. Being so close to such powerful performers reminded me of a time in the early 1980s, when I went with my parents to Stratford, Connecticut, to see James Earl Jones and Christopher Plummer in “Othello.” On that occasion, we were lucky to be sitting just outside the Spray Zone, where their saliva-rich utterances couldn’t reach us. In this instance, the actors also spewed spit, but never in our direction. But I was glad we were wearing our face masks nonetheless.

In “American Buffalo,” shop owner Don (Fishburne) is upset that he has paid an unseen customer $90 for a Buffalo Head nickel. Don begins plotting to not only get the coin back, but have his not-too-bright young assistant, Bobby (Criss), steal the rest of the man’s presumed coin collection. When Teach (Rockwell), a lowlife, high-energy poker buddy of Don’s enters the shop and hears of the plan, he convinces Don that he could do the job better than Bobby. It’s clear that Teach’s confidence and bluster mask a man who doesn’t actually have the skills to pull off the burglary, but Don finally succumbs to the manipulation and the two discuss the details of where and when to commit the crime while keeping Bobby out of it.

Again, I’ll stop short of anything that spoils the story, even though “American Buffalo” has been produced on stage many times and there was even a 1996 movie version starring Dustin Hoffman and Dennis Franz. But it still works, partly because of the brilliant rhythms of Mamet’s words, and partly because of the talent of its three cast members. Fishburne, who can easily dominate the proceedings of any project he’s involved in, holds back just enough to allow Rockwell to run away with the show. Teach is, by nature, the showier part, and Rockwell — with a hangdog mustache and striped or plaid outfits directly out of the play’s 1970s era — takes full advantage. It was magical watching these two intense actors up close. Criss, meanwhile, holds his own portraying Bobby as weary, quiet, and sad.

“American Buffalo” offers a glimpse into the world of men with chips on their shoulders who won’t shy away from criminality to achieve momentary success. Like Mamet’s other works (“House of Games,” “Things Change,” “Oleanna”), the play hasn’t lost a bit of its bite over the years. 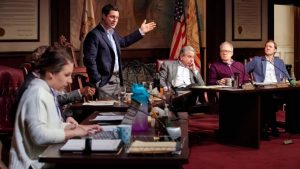 Our third theatrical foray was into “The Minutes,” a relatively new play by Tracy Letts that was originally staged in 2017 by Steppenwolf Theatre Company in Chicago. It was scheduled to debut on Broadway two years ago, but COVID reared its ugly head, so everything was postponed until last month.

“The Minutes” takes place at a meeting of the city council of Big Cherry, a generic American town where the local politicos gather weekly to ostensibly conduct municipal matters. Letts plays the mayor, and is ably assisted by such stage and screen veterans as Austin Pendleton, Blair Brown, and Jessie Mueller.

Noah Reid makes his Broadway debut as Mr. Peel, the youngest and newest councilman, who missed last week’s session because of the death of his mother. He wants to be brought up to date on what happened in his absence and is curious about the apparent removal of another councilman named Carp. Unfortunately for Peel, everyone else on the council is tight-lipped, offering no details.

It’s not until the final third of this 90-minutes-without-intermission play that Letts lets us in on the secrets of the town that are being kept under wraps by its leaders. That’s when “The Minutes” segues from a goofy comedy to a highly-topical drama. It exposes those who would obscure and deny history while legislating the teaching of a whitewashed (yes, I use that term on purpose) version of events.

In doing so, “The Minutes” could have been torn from recent headlines, mirroring moves by right-wingers in Florida, Texas, and other red states. That Letts wrote this show more than five years ago seems awfully prescient.

While some of the characters — including those played by Pendleton, Brown, and Sally Murphy — exist purely for comedic purposes, Reid and the others keep the plot anchored in small town nit-picking, power-grabbing, and Robert’s Rules Of Order. Along the way, Letts and director Anna D. Shapiro cleverly take us from the mundanity of government process to something much more revealing and scary.

Nothing in any of these shows warmed my heart as much as seeing my daughter walk across the stage of the Beacon Theater to accept her graduate school diploma, yet I nonetheless highly recommend all three shows: “Hangmen,” “American Buffalo,” and “The Minutes.”