Too Old To Have A Baby 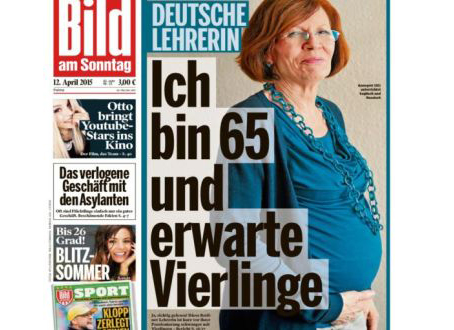 A month ago, Annegret Raunigk, a 65-year-old woman in Germany, had a baby. No, actually, she had four babies — quadruplets — a girl and three boys. She decided to become pregnant again because her 9-year-old daughter wanted a younger sibling. You know how boring it can get when you’re an only child. Besides, it’s important to give 9-year-olds everything they want, the consequences be damned.

Oh, wait, the 9-year-old wasn’t an only child. Raunigk had already given birth to a dozen other kids over the last forty-four years. She also has 7 grandchildren. Apparently, “Raunigk” is German for “Duggar.”

How did Raunigk get pregnant at her post-menopausal age? She had donated, fertilized eggs implanted in her womb. That’s illegal in Germany, but she found a doctor in Ukraine who did the IVF procedure. How ethical!

I mention this story because I’ve read quite a bit of criticism of Raunigk, most of which centers on the fact that it’s not fair to the kids to give birth at that age. After all, she’ll be in her seventies when they start going to kindergarten and in her eighties when the quads graduate high school.

All of that criticism is 100% correct.

But I haven’t seen a single negative word said about Billy Joel’s girlfriend, Alexis Roderick, being pregnant. True, Roderick is only 33, which is a perfectly fine age to have your first child. But Joel is 65! Despite already being married three times, and having a daughter who is 29, he’s about to become a father again at retirement age.

Similarly, no noise was made about George Lucas becoming a father last year at 69, nor Robert DeNiro at 68, nor Steve Martin at 67, nor Larry King at 67, nor Nick Nolte at 66, nor Rod Stewart at 66 (six months after his granddaughter was born!).

Tony Randall was 77 when his first child was born, and he only lived until 84, so that kid lost his father at age seven! How is that a good thing?

In each of those cases, we have an old rich white guy getting a woman half his age to fall for her. In almost every case, the woman’s biological clock was ticking and the man’s erectile dysfunction medication was working, so why not skip the birth control and have a kid? After all, parenthood isn’t too much of a commitment, is it? If you have the money, what does it matter that you won’t be around to see your child become an adult, as long as mommy’s still here?

According to The Guardian, medical experts have called Raunigk’s decision to have more kids at 65 “irresponsible and inadvisable, and warned other women against following her example.” I’d say the same thing about the celebrity dads. By the way, Raunigk is a celebrity, too. A German TV channel and a tabloid newspaper both bought the exclusive rights to her pregnancy and the birth of the quads.

Let’s hope the show’s not a hit, or the foursome might get another sister or brother next year for the sequel.