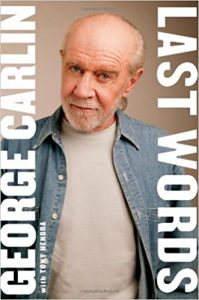 Tony Hendra has a pretty good comedy resume. He was the original editor of National Lampoon, helped create their seminal stage show “Lemmings,” did standup for several years in the 1960s, and co-starred in “This Is Spinal Tap” as Ian Faith, the band’s cricket-bat-wielding manager.

Hendra was also a very close friend of George Carlin, and from 1993 to 2008, the two of them got together often to work on what would eventually become Carlin’s autobiography. After Carlin’s death in June, 2008, Hendra took it upon himself to complete that project, which has just been published as “Last Words.”

I talked with Hendra today about his friendship with Carlin, how the two of them morphed from the kind of straight-laced comedians who made multiple appearances on “The Ed Sullivan Show” into counterculture rebels who helped change the world of comedy for a new generation. We also discussed how Carlin viewed other comedians as competitors — particularly Sam Kinison — and how that influenced his work. And Hendra explained why, when Carlin was being arrested at Summerfest in Milwaukee for doing his infamous “Seven Words You Can’t Say On Television” routine, the impending indecency bust was the least of his concerns on stage that night.

Note: I continued my conversation with Tony the next day on WHAS/Louisville, where we touched on completely different topics from George’s life. You can listen to that interview here.

We followed that up with another conversation on KTRS/St. Louis, with even more topics we hadn’t gotten to before. Listen to that interview here.