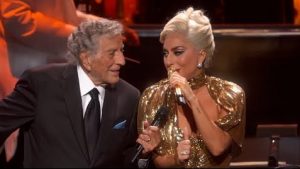 The Tony Bennett/Lady Gaga special that aired last night on CBS was as wonderful as I hoped it would be — except it wasn’t long enough. At one hour, it included highlights of the performances the duo did at Radio City Music Hall in August, but I hope a full version will be made available somewhere. I fear it will be on Paramount+, which means I’ll never see it.

Still, seeing Bennett’s final public appearances was quite satisfying, considering he’s 95 and suffering from dementia. Yes, he was able to remember the lyrics and timing of all of the songs he’s sung for decades — a testament to the power of music to (temporarily) overcome the ravages of the disease — but sadly, two days after the concerts, he didn’t remember doing them. As for Lady Gaga, she deserves credit for opening the show with several songs from her jazz set (which I’d love to see if I’m ever in Las Vegas at the same time she revives her residency there), and then making it clear the evening was really all about Bennett. After he sang several songs with his quartet, she joined him for a bunch of duets, which seemed to bring his energy level up even more.

It was interesting noting the differences in their styles. Gaga is a, well, what’s the female equivalent of “showman”? Is it “show woman,” “show person,” or something else? Regardless, she was perpetually in motion, dancing, twirling, kicking her way across the stage as she sang. Bennett, as he did when we saw him in person six years ago, merely stood still next to the piano with a microphone, allowing his unique phrasing and still-strong voice to fill the room.

At the end of the hour, as Bennett sang his most famous song, “I Left My Heart In San Francisco,” I teared up a bit knowing it’s the last time I’ll ever see him perform. Fortunately, there are plenty of his recordings that will remain available for years to come, including a new one with Gaga I’ll add to my collection soon.