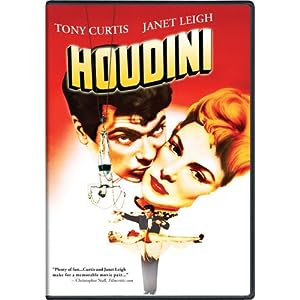 ” and his daughter, Jamie Lee Curtis. But I first noticed him as a kid when I saw his 1953 movie, “Houdini

I had just read a book about Houdini and was fascinated by him, so seeing him portrayed in a movie (albeit an old one by that time) was pretty cool. The film was overly dramatic in parts and took some liberties, but did a fairly good job of showing Houdini’s abilities as a great escape artist and magician, as well as the time he devoted to debunking psychics and other frauds after his mother’s death. The latter made me both a fan of and a skeptic of all things paranormal, even years before I met James Randi.

In reading up on Curtis this morning, I noticed an interesting coincidence. He joined the US Navy and worked aboard the submarine USS Proteus during World War II because he’d been inspired after seeing Cary Grant in “Destination Tokyo

.” Several years later, in 1959, Curtis went on to imitate Grant in “Some Like It Hot

” and co-star with him in “Operation Petticoat

,” a movie set aboard, yes, a submarine.

Curtis had a helluva run, making dozens of mediocre movies but truly making his lasting impression in the decade starting in 1957, when he co-starred with Burt Lancaster in “Sweet Smell of Success

,” Sidney Poitier in “The Defiant Ones

,” Natalie Wood in “The Great Race

,” and as Albert DeSalvo in “The Boston Strangler

,” is full of tales of that life, from his struggles with the Hollywood studio system to his many female conquests. Unfortunately, from there on, it was downhill to dreck like “Bad News Bears Go To Japan” (the third, which killed the series, mercifully) and “Lobster Man From Mars.”

But there was no denying that for a long time, Tony Curtis was as big a star as Hollywood ever had, and that was no illusion.