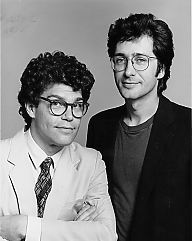 Al Franken and Tom Davis were among the original writers on “Saturday Night Live.” While Franken has gone on to other successes, including an any-day-now seat in the US Senate, Davis has spent most of his life ingesting alcohol and narcotics. He’s very frank about that in his new book, “39 Years of Short Term Memory Loss: The Early Days of SNL from Someone Who Was There.”Davis joined me today on WHAS/Louisville to reminisce about those experiences, from creating the Coneheads and Theodoric of York (Medieval Barber) to appearing as a talking mime in one of the show’s classic sketches, “The Pepsi Syndrome.” We also discussed the drug culture and what they got away with then that they couldn’t do now, the disastrous “SNL in New Orleans” primetime show in 1977 that has never been rerun, and Franken & Davis’ appearance in the movie “Trading Places.”Listen, then click here to subscribe to these podcasts via iTunes!