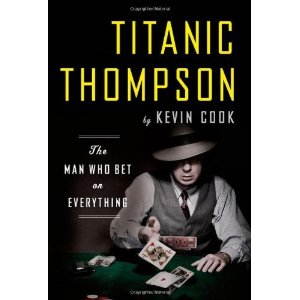 I like stories about con men. I don’t ever want to be their victim, but I’m intrigued by their cleverness and the psychology of how they play their marks. I’m a fan of movies like “The Sting,” “Criminal,” and “Confidence,” and as a kid admired the intricate plots of “Mission: Impossible” episodes.

That’s why I was drawn to Kevin Cook’s book, “The True Story of Titanic Thompson: The Man Who Bet On Everything.” While some describe Thompson as a gambler, he was really a con man who never bet on anything unless he had the edge. He took tens of thousands of dollars off opponents on the golf course, in card games, at horseshoes, and any other way he could think of. As with any professional, he also had to practice a lot, but it was the way he cheated his victims that’s so entertaining.

I invited Cook to join me on KTRS/St. Louis last week so we could talk about Thompson, his cons, and his exploits with Al Capone, Minnesota Fats, Houdini, golf stars Raymond Floyd and Lee Trevino, and Arnold Rothstein (who fixed the 1919 “Black Sox” World Series).