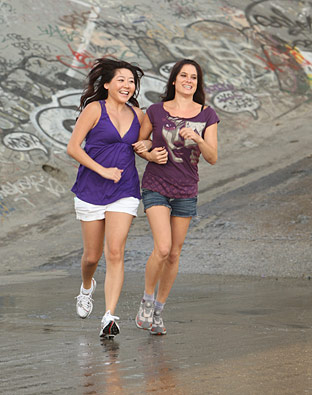 Six weeks ago, before this season of “The Amazing Race” started, I talked with Tiffany Michelle and Maria Ho, the professional poker players who made up one of the teams. They made it halfway through the field before being eliminated last Sunday, so they joined me yesterday on KTRS/St. Louis for a followup.

We talked about the tasks they couldn’t finish on their final leg of the race and the conditions that made it so hard on them as the only all-female team and why they initially hadn’t told the other teams they played poker for a living (preferring instead to claim they worked for a homeless charity in Los Angeles).

We also discussed how a member of another team (Mika) had blown it by refusing to go down a water slide in the previous episode. You’d think that anyone who had ever watched the show would know the sort of challenges they’d face, and either be strong enough to overcome their fear of heights or refuse to go on the show in the first place. Because of that mistake, Mika and Canaan came in last and were eliminated.

Tiffany and Maria went on “The Amazing Race” instead of entering this year’s main event of the World Series of Poker — where they had been the last woman standing in 2008 and 2007, respectively — a decision they don’t regret. But with the final table of the 2009 WSOP about to play out this weekend, I asked for their prediction, and they both think Phil Ivey will win it (for the record, I’m picking Eric Buchman).

To hear the conversation I had with Tiffany and Maria before the season started, click here.