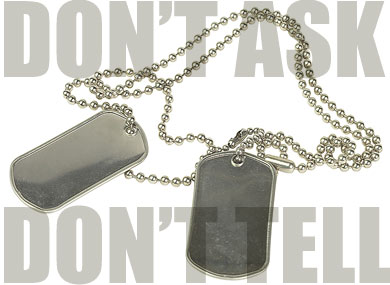 , and told a story about the difficulties his syndicator had in the early days getting some newspapers to carry the comic. It seemed that the older generation of editors and publishers couldn’t relate to what he was drawing and writing, didn’t like his sensibilities, and refused to put “Doonesbury” in their papers.

When Trudeau expressed his frustration to his editor, Lee Salem, and John McMeel, co-founder of the syndicator, they reassured him with two simple words: “They die.” It meant that, as time moved forward, these older stuck-in-the-past gatekeepers would move on and leave the decisions to their younger, hipper colleagues, who were more likely to approve of “Doonesbury.” Eventually, that did happen, and the strip became one of the biggest successes in comics history.

I thought of that story over the weekend when the Senate debated — and finally passed — the repeal of Don’t Ask Don’t Tell. It’s another milestone for civil rights in the US, but not everyone is on board.

Right up to the end, there was John McCain leading the opposition, claiming this would do “great damage” to the military, harm “battle effectiveness,” and deter some Americans from pursuing a career in the military. In doing so, McCain has taken his final step into irrelevancy. He’s not dead, but his politics are so old and out of touch with current events, that he might as well be.

The generation of soldiers now serving our country has grown up with gays in their schools, their dorm rooms, and their peer groups. They’ve seen lesbians in movies and on television who are just as normal (or odd) as everyone else. They have — for the most part — stopped judging someone as an aberration just because of their sexuality. And they know that, even under DADT, they’ve been fighting alongside gay servicemembers in their own units every day.

As for McCain’s prediction that the repeal of DADT will dissuade some people from joining the Army, Navy, Air Force, or Marines, that seems like a good thing to me — a lesson to those bigots that our society and our military are progressing whether they like or not, and if they don’t want to be a part of it, we’ll get along just fine without them.

McCain’s remarks sound eerily similar to those of Gen. Clifton Cates, Commandant of the US Marine Corps, who claimed, “Changing national policy in this respect through the Armed Forces is a dangerous path to pursue as it effects [sic] the ability of the Military Establishment to fulfill its mission.”

Cates wasn’t referring to gays serving openly in the military. He spoke those words in 1949, because he strongly disagreed with President Harry Truman’s plan to integrate the military. Under Cates, the Marines were the last branch of our armed forces to permit blacks to serve alongside whites. Unfortunately, his bigotry lives on in the Corps, reflected in recent remarks by Gen. James Amos, the current Marine Commandant, who fears that allowing gays and lesbians to serve openly could pose a “deadly distraction on the battlefield.”

Perhaps Amos should find some of the African-Americans who served as proud, brave Marines during the Korean War, the first conflict involving a fully-integrated US military, and ask what they would have thought about being considered distractions. Then let’s see John McCain look into the eyes of blacks who served with him in the Navy during the Vietnam War while he tells them they caused great damage or reduced battle effectiveness.

The average age of the US active duty force is 28. For those currently serving — who wear the uniform to fight for Americans of every race, religion, gender, and sexuality — they must look at the older generation, represented by Amos (age 64) and McCain (age 74), and know that those ancient obstacles to civil rights progress will continue to fall.