Theater Review: “The Lifespan Of A Fact” 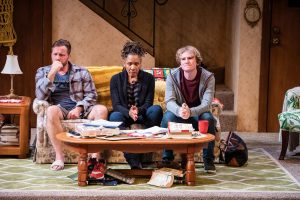 During my radio career, I always demurred when someone called me a journalist, which I never have been. I was a talk-show host — opinionated, biased, and (hopefully) entertaining — but that didn’t give me the leeway to get facts wrong or make something up about a real event, person, or controversy. It always annoyed me when I heard other hosts (on the same station or the competition) who were less concerned with getting it right.

That’s a line from the play, “The Lifespan Of A Fact,” spoken by John D’Agata, the author of an essay about suicide in Las Vegas. His essay is set to be published in a magazine called Panorama — but only after it has been fact-checked. Editor Emily Penrose assigns that task to a young intern, Jim Fingal, unsure of whether he’s up to it.

It turns out he is, to the extreme. He finds 130 errors in D’Agata’s 15-page essay. But are they really errors, and if some of them are wrong, does that make the piece un-publishable? That’s the conflict at the heart of the play: Fingal’s precision vs. D’Agata’s willingness to stretch the truth to make a story better vs. Penrose’s printing deadline.

When writing about something that actually happened, does it matter that you get every detail right, or can you use literary license to change things so they flow better? In a world where users of Twitter and other sites serve as cloud-based, crowd-sourced fact-checkers, do you dare publish bits of a story you know to be false, perhaps invoking the wrath of the minutia-obsessed? If you claim you’re not a journalist (as D’Agata does) and your piece is an essay, not an article, does that give you more leeway? Where is the line between fact-checking and nit-picking?

These are the questions at the heart of the play, which has its own unusual history.

It started in 2003 when D’Agata wrote his essay for Harper’s Magazine, which decided not to publish it after a disagreement over its authenticity. He was then approached by another publication, The Believer, which offered to print the piece — if it survived a thorough fact-check. Fingal did his job, and the final version of the essay, with edits, ran seven years later, in 2010. Then D’Agata and Fingal decided to create a book about their struggles, verbal and otherwise, which was published in 2012 and became a best-seller. From that, Jeremy Kareken, David Murrell, and Gordon Farrell created the script for the play, which debuted on Broadway last year, starring Daniel Radcliffe, Cherry Jones, and Bobby Cannavale.

That production ran for three months, during which it was seen by Hana Sharif, the newly-named artistic director of the St. Louis Repertory Theatre, who decided to add it to the roster of shows for her first season. I’m glad she did, because The Rep’s version of the play is first-class. The script sparkles with wit and tension, with perfect performances by Perry Gaffney (Emily), Griffin Osborne (Jim), and Brian Slaten (John), equaled by the production and lighting teams, which have created just the right look from beginning to end.

“The Lifespan Of A Fact” is a timely work for an era when facts get debated as if they’re malleable and by a lying president mocks journalists with claims of “fake news.” It runs just 85 minutes without an intermission. When it ends, it sparks conversations about whose approach to the underlying story is right, what “right” means, and how far you can bend the truth before it breaks.