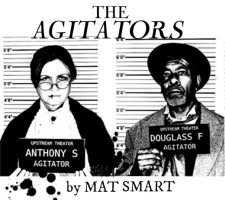 You probably know the names Susan B. Anthony and Frederick Douglass, but you may not know that the two civil rights activists were close friends. “The Agitators” puts them on stage together and tracks that friendship through nearly five decades as they plot their strategies to change the constitution so that blacks and women could vote and gain the equality they deserved but had been robbed of by the founding fathers.

J. Samuel Davis is perfect as Douglass, with a fire in his eyes as he speaks about his cause and a sadness when he remembers his life as a slave, including the fact that he doesn’t even know his own birthday because slave owners didn’t put dates on their property. Meanwhile, Erin Kelley matches him word for word as Anthony, arguably the most famous American woman of the 19th century, who barely sat down as she traveled the country arguing for suffrage and gender equality.

The two are indeed a pair of agitators, and not only to the outside world. Anthony lectures Douglass about how little he does at home to help his wife Anna raise their children, cook their meals, and clean their house, analogizing her to a maid. Douglass reminds Anthony that, after she touches him in the stands at a baseball game, drawing the attention of a red-faced white man with a gun in his pocket, it is Douglass who has to leave the stadium while Anthony’s skin color will protect her.

Playwright Mat Smart keeps both characters on stage virtually throughout the two-act play as time passes and their relationship deepens. While there’s no real antagonist portrayed — the misogynist, racist views of the nation easily fill the role of villain — there is a hurdle the two must overcome regarding their disagreement over the 15th Amendment.

If, like me, you knew little about these two towering historical figures, you’ll learn a lot from “The Agitators.” Even if you have studied them, these portrayals will add dimension to what you think you know. The only aspect of this production I didn’t like was having multi-instrumentalist Syrhea Conway performing her own music as a soundtrack from just offstage. Rather than enhancing the scenes, the accompaniment was an unnecessary distraction.

I could see “The Agitators” making its way to Broadway with nothing but two powerful actors on stage. To be successful there and draw a crowd, it would need to have big names playing Douglass and Anthony. My suggestions: Samuel L. Jackson or Chadwick Boseman opposite Laura Linney or Laurie Metcalf.

In lieu of that, I recommend you see Davis and Kelley in the current Upstream Theater production, directed by Lisa Tejero, at the Kranzberg Arts Center in St. Louis, now through October 13th.