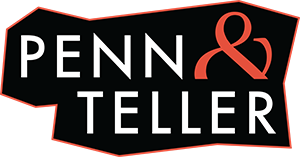 My wife and I have seen Penn & Teller many times since they made their off-Broadway debut in the mid-1980s, but haven’t gone back for seven years or so until this weekend. I’m glad we did.

Unlike other Vegas acts, who have been doing the same tricks over and over, year after year, P&T regularly mix in new routines, many of which take months to perfect. Even then, they keep some classics for new audiences, while setting aside others like the double-bullet catch they closed the show with forever.

The current set list starts with Cell Fish, in which the guys make an audience member’s cell phone disappear, then re-appear inside a fish. There’s a very nice piece of misdirection during the bit involving a bucket lifted above their heads, and they execute it perfectly. Penn explains during the show that the word misdirection has different meanings for magicians than it does for lay people — I’m sure he’d be happy to explain how I just used it incorrectly.

There are fewer physical bits in this show, probably because Teller’s having back problems that will be corrected by surgery next month (they’re taking five weeks off so he can heal). In place of that, they’ve added more mentalism routines — I counted three — that are jawdroppingly good. Teller does perform a couple of his best solo bits — The Red Ball and The Goldfish Bowl. The former is a very pretty piece of business, but the latter is stunning. As he did with Shadows over the years, he has made The Goldfish Bowl even more beautiful with just a few added facial expressions and moves.

Penn and Teller have added a couple of tributes to legendary magician Johnny Thompson who, after a long career on the road, has worked with them for the last 20 years, helping them devise tricks, perfecting the script, and acting as chief judge of the acts who appear on the duo’s TV show, “Fool Us.” When you first enter the theater, as Mike Jones (on piano) and Penn (on bass) play live jazz in the corner, you’re invited to go on stage to inspect some of the props Johnny used while doing his act hundreds of times a year with his wife Pam. Then, during the show, Teller recreates part of Johnny’s dove routine (with Georgie Bernasek doing Pam’s part). It’s a nice touch. If you missed it, read my review from this spring of “Gambler’s Ballad,” a documentary about Johnny Thompson and one of his greatest card tricks.

Speaking of “Fool Us,” which has just begun a new summer season on The CW, it is certainly responsible for increased attendance at their show at the Rio (there were over 1,300 people in the audience the night we were there). As they’ve always done, Penn and Teller (and Mike) stand in the lobby after the show greeting fans. This used to be an exercise in autograph etiquette, but it’s become a selfie-fest, as everyone wants a picture with the guys, who stay there until every last person has had a chance.

I highly recommend you catch Penn & Teller’s show while you can. Penn is 63, and Teller is 70. Who knows how long they’ll want to keep doing five shows a week, both at the Rio and in theaters around the country? Until that day comes, however, they remain the preeminent magic show in Vegas — and pretty much anywhere else you care to name.