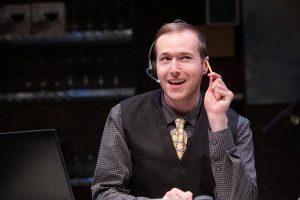 “Fully Committed” is a play involving dozens of characters — but only one actor, Will Bonfiglio.

He plays Sam, an out-of-work actor who takes reservations for one of those red-hot New York restaurants everyone seemingly wants to go to. Despite the fact that the place is booked up (the chef insists it’s “fully committed”) three months in advance, the phone rings nonstop with demands for tables tonight or this weekend. Bonfiglio plays all of those callers, too, including many with the attitude, “Don’t you know who I am?”

For example, there is Gwyneth Paltrow’s assistant, Bryce, who not only needs a table to her boss’ liking, but also special menu (“vegan, but no legumes”) and lighting requests. There’s Carolann Rosenstein-Fishburn who must talk to the chef immediately, will not bear being put on hold, and calls repeatedly when he won’t answer. There’s a guy who may or may not have mob connections who wants the waiters to sing “The Lady Is A Tramp” when he arrives with his girlfriend-du-jour. Then there’s the editor of Bon Appetit magazine, whose photographer has been sitting in the restaurant’s lounge, waiting for hours to snap a few pictures of the chef, who himself is a box of trouble. In addition, Sam must also juggle his father, his brother, the kitchen staff, his reservation line colleague who hasn’t shown up to work, and many more.

That means Bonfiglio barely gets a break in the 90-minute play. He pauses for a few seconds here and there for a drink of water before continuing what is a nearly non-stop monologue, switching personas and voices. He does most of this in a chair behind a desk, but also moves about the set and adds physical mannerisms to distinguish the various people. It’s a tour-de-force the likes of which I haven’t seen since Kevin Kling in “21A,” a similarly multi-character one-man show we saw off-Broadway in 1986.

Becky Mode’s script includes some delightful shots at the pretentiousness of super-high-end food temples, where a meal costs $350 per person, the chef refers to his offerings as “molecular gastronomy,” and the dishes include “smoked cuttlefish risotto in a cloud of dry ice infused with pipe tobacco” and “nitro-frozen shaved foie gras enshrouded in a liquid chicken-filled orb.”

I would never set foot in a place like that, but I’m glad I spent time with Sam and all the others brought to life by Bonfiglio. I give “Fully Committed” a 9 out of 10.

It continues at the New Jewish Theatre in St. Louis through this weekend, and likely at other regional theaters, too. See it when it comes near you.