Theater Etiquette In The Digital Age 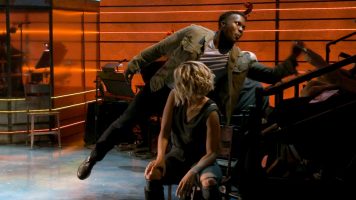 I just got around to reading an October 6th NY Times piece by Michael Paulson and Michael Cooper regarding “a heated debate about theater etiquette in the digital age.”

The “debate” is over audience members who can’t keep their hands off their smartphones during shows, using them to take photos, send texts, or post to social media. The piece is accompanied by video of Joshua Henry — star of the Off Broadway musical “The Wrong Man” — who noticed an audience member recording his performance. After trying several times to signal his disapproval to the man, Henry finally reached over, took the guy’s phone, shook it back and forth to indicate it was a no-no, and slid it under the riser — all without missing a single line in the song.

In their article, the authors wrote this:

Such confrontations are fueling a new debate about digital-era etiquette. No one likes a ringing cellphone to interrupt a cathartic moment. But both theater and classical music have aging fan bases and a desire to attract younger and more diverse audiences, and some suggest that an emphasis on behavioral restrictions is a form of off-putting elitism.

Some observers suggest that the restrictions on audience behavior are snobbish, elitist, or even manifestations of white privilege.

Snobbish? Elitist? No and no.

The snobs and elitists are the ones using their phones with no regard for the people around them. They don’t care that, in a darkened theater, the light from their devices is distracting to those nearby, breaking the magical connection between actors and audience. One moment you’re sitting there, being drawn into the theatrical reality — and the next, your eyes are drawn away by the glare of some idiot’s Instagram feed. It’s an act as intrusive as providing running commentary during the show would be.

What about the respect owed to those onstage, of every race, who have worked for years to get roles in shows on a stage in New York (or anywhere)? Then, after finally landing them, rehearsing them, and bringing them to life, do they deserve to have their work interrupted by your personal desire to act like you’re in your own living room? At that point, you’re the one displaying your privilege, as if only you matter and damn the rest of us!

I’ve written about this subject in regard to music and comedy concerts — most recently last month, when I urged more facilities to lock up audience members’ phones in Yondr pouches. Now I guess I have to extend that to theaters (and everywhere else live performances take place).

Yes, it’s important that Broadway, Off Broadway, and even regional houses draw younger and more diverse theatergoers. But the way to do that is not to toss reverence for both the actors and fellow audience members out the window.