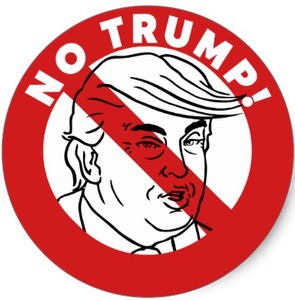 I have never seen a political candidate so publicly disgusted by, yet so totally dependent on, the national media as Donald Trump. At his rallies, he tells his crowd that the media lie about him constantly, and they shouldn’t trust any reporters. It’s no wonder that his sheep believe him so much that reporters have told stories of being cursed at and even spit on by his supporters.

However, the most dangerous place to be in America is between Donald Trump and a live television camera. He plays to it, agrees to appear on pretty much any network any time — either in person or by phone — deflecting questions, offering alternate realities to whatever he’s said before, and making up something newly outrageous to say. Then he goes back to disparaging the very outlets that afforded him that free media. No wonder he hasn’t spent much on paid commercial time.

I’d like to see every media outlet refuse to cover Trump for awhile. Not forever but, say, 48 hours. Can you imagine how he’d feel when he got on stage and there was an empty press pen at one event after another? I’m talking no reporters at all, no television cameras, no radio microphones, no bloggers, no photographers, no one. Just ignore him, the way you did Lindsey Graham and Martin O’Malley during their candidacies.

The problem is that while Trump is addicted to media attention, they’re hooked on him even more. If they’re not carrying one of his events live, they’re talking about what he said at the last one, because he boosts their ratings. Even if it’s just a little bit, that’s what they crave. That’s why they so easily whore out their dignity and bow down to his egomaniacal ranting. And Trump knows how to exploit their addiction better than an unlicensed oxycodone dealer with a customer base of suburbanites with back problems.

The irony is that the media continues to slip in opinion polls, but it’s not because more Americans believe Trump’s claims about them. Rather, it’s due to how obviously they’ve lowered their standards and given away their most valuable assets — access to the public and a critical eye.

Sure, Trump can tweet to his followers and his sycophants can repeat his talking points on Facebook. But that doesn’t come anywhere close to the reach of live television coverage, all day, every day — and he knows it.

Unfortunately, no media outlet wants to be the first to pull out, because they’re afraid they’d miss the exact moment he says the next dumb thing. So the cameras and microphones aren’t going anywhere — and no one in those press pens or the editors who sent them there will ever look in the mirror and recognize who’s responsible for perpetuating their own doom.