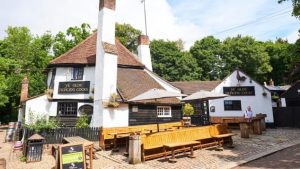 Years ago, during a trip to England, we visited a pub that had been in business for over 600 years. That was an era where few people were as tall as I am (6’4″), thus the ceilings were so low I wasn’t able to stand fully erect and had to duck even lower to get through door frames.

The barkeep told us that, for those six centuries, the place had been owned and run by the same family (he was not one of them, just an employee). That impressed me, but I thought how awkward it would feel to be the descendant who was running the place when it went out of business. I can hear the ghosts of generations past: “Jenkins, do you know how many of your ancestors managed to keep this pub open and thriving, and now you’ve gone and mucked it all up?”

I don’t know if that particular pub is still in business, but there’s one even older in Britain that’s about to close after a thousand years. The current landlord blames it on the COVID-19 pandemic, which has, sadly, forced lots of businesses to shut down over the last two years. But consider other events that didn’t force this pub to shutter its doors in the past: the Spanish Flu pandemic, the Depression, the financial collapse of 2008, and two world wars. And those were just in the last century, a mere tenth of a millennium.

It must be Jenkins’ fault.