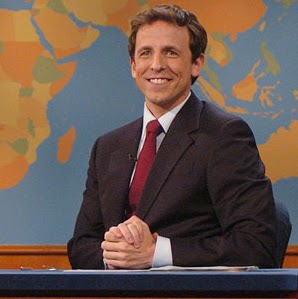 Quick, name something funny that Seth Meyers did on “SNL” (not including the “Really?” segments with Amy Poehler).

If you can’t come up with anything, you’re not alone — and yet NBC announced yesterday that Meyers will take over its “Late Night” show when Jimmy Fallon takes over “The Tonight Show” from Jay Leno early next year. The Leno replacement saga has been worked over plenty, and I think Fallon will do a good job behind his desk because he has established himself as passionate about presenting a fun TV show every night.

But I don’t get the Meyers promotion for several reasons:

One of the positives I’ve heard about Meyers is how good he was when he filled in for Regis Philbin as Kelly Ripa’s co-host. In fact, he was considered for the job as Reege’s replacement before Michael Strahan got it. But being the guest host on a morning TV show that’s run to perfection by producer Michael Gelman is a very different vehicle than having your own late night hour, where the host’s sensibility has to infect every element.

What will those elements be? In the statement announcing the move yesterday, Meyers said that no decisions have been made yet about whether the format of “Late Night” will change in any substantial way — not even whether there will be a house band. So the network bought a show without knowing what it’s going to be? NBC would never do that in primetime (“I’m going to do a sitcom, but I don’t know what it’s about or who’ll be in it or what the premise is going to be, and they gave me a commitment for 2 years!”), so why rush into this “Late Night” announcement now? Has there even been a single meeting about content?

While I’m on the subject, this would be a good time for “SNL” to drop the whole “Weekend Update” concept. When it debuted in 1975, its only competition for televised topical humor was Johnny Carson’s monologue. In 2013, by the time Saturday night rolls around, every story in the world has already been taken apart comedically by Jay Leno, David Letterman, Jimmy Kimmel, Jimmy Fallon, Craig Ferguson, Jon Stewart, and Stephen Colbert — leaving “Weekend Update” to pick at the carcass and rarely find any meat left.

Meyers has said he loves the Update spots where a cast member sits alongside him as a character doing commentary of some kind. Characters that, you may have noticed, are never given names. This is a trend that goes back to Adam Sandler not bothering to think of a name for “Opera Man” or “Cajun Man.” In the Meyers era, you get “Drunk Uncle” or “The Girl At A Party You Wish You Hadn’t Started A Conversation With.”

Much of the humor in a great character comes from the audience discovering its concept, not by being told in advance, but because the writing is so strong. Must I invoke the names Father Guido Sarducci, Chico Escuela, Dr. Jack Badofsky, and Emily Litella?