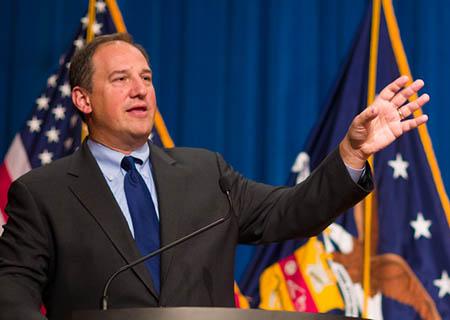 This is a wonderful profile of my brother, Seth Harris, the former Deputy Secretary of Labor, written for a public policy journal at his alma mater, Cornell, where he now teaches as a Distinguished Scholar (in addition to his work for Dentons law firm, TV appearances, and public speaking)…

Harris signed on with then-Senator Obama in January 2007 – a full two years before the inauguration — and advised his Senate office and presidential campaign through Election Day. He began working to build the administration in August 2008 as a member of the agency review working group of the Obama-Biden transition planning team, and was tasked with overseeing the transition in 15 federal agencies, including the Labor, Education, and Transportation Departments. After the President’s swearing in, he was asked to manage the Labor Department as deputy secretary, assuming the position after being unanimously confirmed by the U.S. Senate in May 2009.

So why did he leave? “After 7 years I was pretty tired,” Harris says. “Folks who work in government at the level of which I was fortunate enough to work really owe it to the country to make an assessment about whether or not they are contributing as much value as they did when they entered the job.” But there was also another reason – the intuitive political operator realized that incoming secretary and good friend Tom Perez, after finding his feet with help from Harris, “needed space to operate…and I gave him that space”.

Harris returned to ILR in January 2014 as a distinguished scholar and is teaching the undergraduate labor and employment law class he once took as a freshman. A respected law professor and author, he made more than a dozen television appearances last year, is regularly quoted in the news media, and keeps up a steady barrage of blog posts. Most of them are on the issue du jour of economic inequality, especially the falling wages of the bottom quintile of wage earners, a situation Harris calls “unfair, unjust, bad for our country, and bad for our economy.” But his advice to the White House on how to tackle the problem remains strictly off-the-record: “As a public commentator I’m trying to elevate the issues I think are important to the country and to the people….but when I offer my advice it’s private and it’s carefully and reasonably phrased, it’s a different function.”