“The Phantom Of The Open” 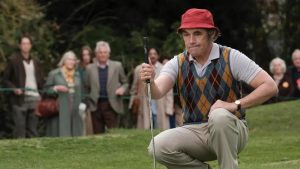 Six years ago, a movie called “Eddie The Eagle” told the story of a goofy guy who was the first Englishman to qualify for the Winter Olympics in ski jumping — a sport he knew little about. Despite Eddie finishing last in all his events, he became a folk hero.

Now comes “The Phantom Of The Open,” another classic root-for-the-underdog story about a similarly untalented outsider. Like “Eddie The Eagle,” it’s based on a true story and is just as much fun.

In 1975, Maurice Flitcroft was a crane operator at a shipyard in working-class Barrow-in-Furness. An unabashed optimist, he was watching TV one day when he saw Tom Watson win The British Open, taking home a prize of $10,000. Maurice could have used that kind of money to make life better for his wife and three sons. So, even though he’d never played golf, he set his eyes on entering and winning the 1976 Open.

Maurice’s personal mantra was “practice is the road to perfection.” The problem was he couldn’t afford a membership to the local golf club and thus had to practice on a sandy beach or a park. He had never played a single round of golf until his unlikely entry into the Open was accepted by officials who couldn’t believe someone would claim to be a professional golfer who wasn’t.

Director Craig Roberts includes some animated sequences to illustrate Maurice’s dreams, but otherwise plays it right down the middle and gets just-the-right-tone performances out of his entire cast — and, in the last third of the film, one of the greatest camera shots I’ve ever seen.

You don’t have to know anything about golf to enjoy the movie, just as you don’t have be a soccer fan to get a kick out of “Ted Lasso.” In fact, the film and the TV series share the same upbeat optimism.

As Maurice, Mark Rylance never plays it for laughs, although the movie is quite funny. The cast also includes Sally Hawkins (“The Shape Of Water”) as Maurice’s supportive wife, and Rhys Ifans (the roommate in “Notting Hill”) as a British Open official incensed at Maurice’s presence in his midst. Through him and other antagonists, “The Phantom Of The Open” also makes a statement about class, with the upper crust snobs looking down their noses at Maurice for even daring to invade their turf.

I give “The Phantom Of The Open” an 8.5 out of 10. When you see it — and you should — stick around for the credits, which feature clips of the real Maurice in action. Opens today in theaters.