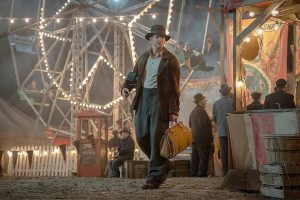 My wife only went to one movie screening with me last year because she felt uncomfortable being in a theater with lots of people during the pandemic. That meant she didn’t see “Nightmare Alley,” the Guillermo del Toro movie starring Bradley Cooper which made my list of the Best Movies Of 2021. But now that it’s streaming on HBO Max, we watched it together last night, she enjoyed it, and I stand by the review I posted after my first viewing.

Sadly, the movie did virtually no box office business, but I hope more people discover it now that they can enjoy it in the comfort of their homes. The same goes for Steven Spielberg’s remake of “West Side Story,” “Licorice Pizza,” “King Richard,” and several other titles that couldn’t draw the public into theaters the way the latest Spider-Man movie did.

It’s all an indication of a fundamental shift in the way we consume movies. A large part of the populace feels, as my wife does, that it’s too risky to sit in a theater with a few hundred other people during a pandemic. Ironically, the audiences for some of these high-quality films have been so sparse that she (and they) could easily find a seat without having to worry about being within the aerosol-spraying radius of other humans.

But more so, many of us have simply gotten used to enjoying movies in our own living rooms. Even if they’re not streaming through a Netflix or Prime Video subscription, it still costs only a few dollars to watch relatively recent films — far less than it does to shlep to a theater and pay for a ticket or two.

What’s sad is the loss of a communal experience. After the opening weekend of a great movie, there was a buzz that spread, well, virally, causing others to rush to the theaters so they could not only see the hot new thing, but also be part of the cultural commentary about it. With so few offices full of personnel these days, the phrase “water cooler topic” is outdated, but social media picks up the slack. Except that we don’t all watch anything in the same time frame anymore. I was buzzing about “Nightmare Alley” ten weeks ago, and have waited for others (including my wife) to catch up to me.

What baffles me is some movie exhibitors are still building new facilities (e.g. Alamo Drafthouse, which is expanding out of Texas with new theaters slated to open later this year in St. Louis and a half-dozen other cities). They’ll do fine as long as there are Marvel, Bond, and Star Wars extravaganzas to project onto their screens. But the smaller, mid-range movies, the ones with budgets of $30-60 million, will continue moving in large numbers to the streaming services, which have much deeper pockets than any of the Hollywood studios.

“Nightmare Alley” is reported to have cost $60 million, but managed only $10 million in domestic box office, and about the same overseas. Despite the quality of the movie, that’s a flop by anyone’s standards. The same goes for other titles I admired last year, like “Belfast” and “Stillwater.” Yet if they had been made by Netflix and intended solely for a streaming audience, they would undoubtedly have been seen by many, many more people.

There’s the tradeoff filmmakers must now make. If Netflix bankrolls your movie, there’s no back end if it blows up and draws a ton of eyeballs — you get paid the same fees up front, regardless of how well it does. On the other hand, you don’t have to run around trying to get financing (which everyone in the business agrees is the most difficult part of getting any project made), and your dream of success won’t be impacted by a pandemic that keeps potential viewers from seeing your work on the big screen.

This morphing of the movie-watching paradigm is only moving in one direction, and it’s not in reverse. That’s the nightmare alley AMC, Regal, Marcus, and other theater-owning corporations are headed down — not to mention the dilemma art houses (e.g. Landmark Theatres) face, with their older audiences and mid-budget offerings.