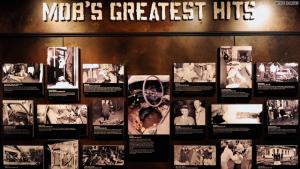 Last November, I wrote about visiting The Mob Museum in Las Vegas, a building full of terrific exhibits about the men who built the town, the impact of organized crime there and elsewhere in America, and the law enforcement agents who tried to capture or kill them fought it. On my America Weekend show, I talked with Jonathan Ullman, executive director of The Mob Museum, about the mob’s Vegas history, whether vestiges of those days still exist, and the story of one amazing undercover cop who I’d never heard of until visiting the museum (Jack Falcone, who should be as famous as Donnie Brasco).