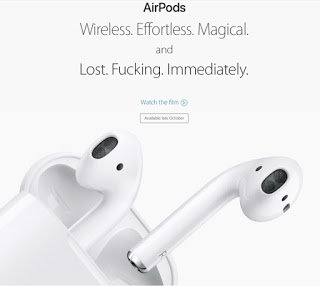 I watched some of Apple’s iPhone 7 introduction presentation this afternoon, and didn’t come away too impressed. The new model isn’t enough of an upgrade from the iPhone 6 to make me want to order it, but I’ve always had an even-numbered iPhone bias — I’ve owned models 2, 4s, and 6, but none of the odd versions in between.

The company still makes beautiful products, but they wasted quite some time today on the design and color options of the iPhone 7. What they fail to realize is that most consumers, upon purchasing a smartphone, immediately buy a cover or shell to protect it, rendering all that magnificent exterior design work moot. The perfectly polished aluminum back is less important that knowing the whole thing won’t break or dent when we inevitably drop it on the floor. On the other hand, making it waterproof will save a lot of iPhones from being destroyed in bathroom accidents arising from someone’s grip loosening while checking Facebook on the toilet.

Today, Apple proudly introduced its new AirPod ear pieces, which will work via Bluetooth but won’t be connected to your phone or each other by wires. Sounds cool, but when one of them pops out of your ear, there won’t be anything to keep it from falling to the floor (or into the toilet). That will be a problem for a lot of people (like me), for whom the basic mold doesn’t fit snugly in our ears. I can’t wear the current included-for-free EarBuds for that reason, so I’m certainly not going to shell out $159 for the similarly problematic AirPods. It also means a lot more pretentious people walking around with these things on their heads, even when they’re not listening to anything — just like the self-important folks wearing Bluetooth phone ear pieces all the time, regardless of whether they’re on a call.

Then there’s the change that invoked a lot of ridicule online today. It began when, in describing Apple’s decision to do away with the headphone jack and forcing you to use the lightning connector instead, an executive on stage used the word “courage.” Who are you, Dan Rather? Yes, the company is so brave for making you either buy all new earpieces (AirPods, anyone?) or use the mini-to-lightning dongle that will be included in the iPhone 7 box. What he didn’t explain is how you’re supposed to use wired headphones and charge your phone at the same time.

I guess the answer is: courageously.